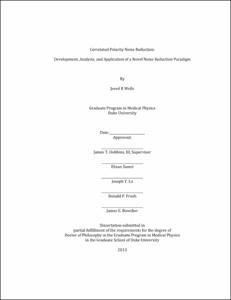 Image noise is a pervasive problem in medical imaging. It is a property endemic to all imaging modalities and one especially familiar in those modalities that employ ionizing radiation. Statistical uncertainty is a major limiting factor in the reduction of ionizing radiation dose; patient exposure must be minimized but high image quality must also be achieved to retain the clinical utility of medical images. One way to achieve the goal of radiation dose reduction is through the use of image post processing with noise reduction algorithms. By acquiring images at lower than normal exposure followed by algorithmic noise reduction, it is possible to restore image noise to near normal levels. However, many denoising algorithms degrade the integrity of other image quality components in the process.

In this dissertation, a new noise reduction algorithm is investigated: Correlated Polarity Noise Reduction (CPNR). CPNR is a novel noise reduction technique that uses a statistical approach to reduce noise variance while maintaining excellent resolution and a "normal" noise appearance. In this work, the algorithm is developed in detail with the introduction of several methods for improving polarity estimation accuracy and maintaining the normality of the residual noise intensity distribution. Several image quality characteristics are assessed in the production of this new algorithm including its effects on residual noise texture, residual noise magnitude distribution, resolution effects, and nonlinear distortion effects. An in-depth review of current linear methods for medical imaging system resolution analysis will be presented along with several newly discovered improvements to existing techniques. This is followed by the presentation of a new paradigm for quantifying the frequency response and distortion properties of nonlinear algorithms. Finally, the new CPNR algorithm is applied to computed tomography (CT) to assess its efficacy as a dose reduction tool in 3-D imaging.

It was found that the CPNR algorithm can be used to reduce x ray dose in projection radiography by a factor of at least two without objectionable degradation of image resolution. This is comparable to other nonlinear image denoising algorithms such as the bilateral filter and wavelet denoising. However, CPNR can accomplish this level of dose reduction with few edge effects and negligible nonlinear distortion of the anatomical signal as evidenced by the newly developed nonlinear assessment paradigm. In application to multi-detector CT, XCAT simulations showed that CPNR can be used to reduce noise variance by 40% with minimal blurring of anatomical structures under a filtered back-projection reconstruction paradigm. When an apodization filter was applied, only 33% noise variance reduction was achieved, but the edge-saving qualities were largely retained. In application to cone-beam CT for daily patient positioning in radiation therapy, up to 49% noise variance reduction was achieved with as little as 1% reduction in the task transfer function measured from reconstructed data at the cutoff frequency.

This work concludes that the CPNR paradigm shows promise as a viable noise reduction tool which can be used to maintain current standards of clinical image quality at almost half of normal radiation exposure This algorithm has favorable resolution and nonlinear distortion properties as measured using a newly developed set of metrics for nonlinear algorithm resolution and distortion assessment. Simulation studies and the initial application of CPNR to cone-beam CT data reveal that CPNR may be used to reduce CT dose by 40%-49% with minimal degradation of image resolution.