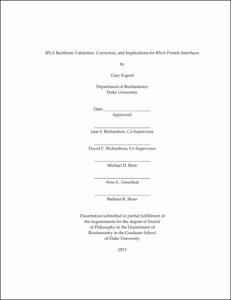 RNA is the molecular workhorse of nature, capable of doing many cellular tasks, from genetic data storage and regulation, to enzymatic synthesis--even to the point of self-catalyzing its own replication. While RNA can act as a catalyst on its own, as in the hammerhead ribozyme, the added efficiency of proteins is often a necessity; the ribosome--the large ribozyme responsible for peptide chain formation, is aided by proteins which ensure correct assembly and structural stability. These complexes of RNA and proteins feature in many essential cellular processes, including the RISC silencing complex and in the spliceosome. Despite its enormous utility, structural determination of RNA is notoriously difficult--particularly in the backbone, since a nucleotide standardly has 12 torsion angles (including &#967;) and 12 non-hydrogen atoms, compared to 4 torsions (including &#967;1) and 4 non-H atoms in a typical amino acid. The abundance of backbone atoms, their conformational flexibility, and experimental resolution limitations often result in systematic errors that can have a significant impact on the interpretation. False trails due to structural errors can lead to significant loss of time and effort, especially with such high-profile complexes as the ribosome and the RISC complex.

My research has focused on harnessing the recently discovered ribosome structures and the Richardsons' RNA dataset to find trends in RNA backbone conformations and motifs that were then used to develop structural validation techniques and provide improved diagnosis and correction techniques for RNA backbone. Methods for fixing RNA structure have been developed for both NMR and X-ray crystallography. For NMR structures, a method for assigning RNA backbone structure based on NOE data was developed, leading to improved identification and building of RNA backbone conformation in NMR ensembles. For crystallography, our method of diagnosing the correct ribose pucker from clear observables allows reliable assessment of pucker in validation or refinement. Observed differences in bond-lengths, bond-angles, and dihedrals have been categorized by sugar pucker in the PHENIX refinement package. I have shown that this improves the refinement behavior of both pucker and geometry.

There have also been improvements in identifying structural motifs. Many previously identified structural motifs have now been defined in terms of backbone suitestrings, a series of 2-character code divisions of RNA backbone that show the best clustering of dihedral angle correlations. Combined with a BLAST-like alignment program called SuiteAlign, these suitestrings were quickly and easily identified in a number of structures, eventually leading to the discovery of multiple instances of T&#968;C-loop structures in the ribosome.

To facilitate error diagnosis and corrections in RNA-protein complexes, as well as to expand the knowledge base of the scientific community as a whole, a database of RNA-protein interaction motifs has been developed. This database is rooted in the quality-filtering, visualization, and analysis techniques of the Richardson lab, particularly those developed by Laura Murray specifically for RNA structures.

The consensus backbone conformers, pucker diagnosis, and all-atom contacts have been combined to develop first manual and then automated tools for RNA structure correction. I have applied all these techniques to improve the accuracy of a number of important RNA and RNA/protein complex structures.