Physiological Ecology and Vulnerability to Climate Warming in Anolis 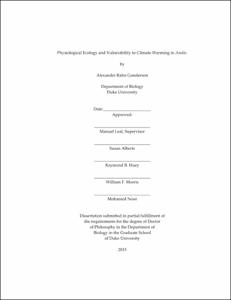 Human activity has resulted in significant increases in air temperature over the last century, and air temperatures are expected to continue rising at an accelerating rate over the next 100 years (IPCC 2007). The warming that has already occurred has had significant impacts on the worlds biota: species ranges are shifting north (or upslope), seasonal phenological events are occurring earlier, disease dynamics are changing, and populations are going extinct (Walther et al. 2002; Parmesan & Yohe 2003; Parmesan 2006; Walther 2010; Pau et al. 2011). Understanding the temperature-dependent biological mechanisms that lead to such changes is a major priority: only with such understanding can we hope to make a concerted effort to mitigate the effects of continuing climatic change.

There are three general biological mechanisms by which organisms can respond to, and potentially buffer themselves from, the direct effects of climate change: 1) physiological plasticity, 2) behavior, and 3) evolution. Here, I refer to physiological plasticity as changes in thermal reaction norms, which include sensitivity to thermal change and tolerance for thermal extremes (Huey & Stevenson 1979). These plastic responses can be reversible (acclimation) or be fixed by developmental or cross-generational non-genetic processes (West-Eberhard 2003; Ghalambor et al. 2007; Angilletta 2009). There appear to be global patterns of plasticity in thermal physiology, as temperate ectotherms tend to be more plastic than tropical ectotherms (Feder 1978; Tsuji 1988; Ghalambor et al. 2006). This difference is hypothesized to result from differences in seasonality: temperate ectotherms can experience a much wider range of thermal conditions than tropical ectotherms, and thus temperate environment might select for plasticity to track changing conditions. If physiological plasticity can buffer organisms from warming (Stillman 2003; Somero 2010), then tropical ectotherms may be at a disadvantage in the face of climate change (Huey et al. 2009).

In general, behavioral responses to thermal challenges can be thought of as occurring on either local or regional scales. At the local scale ectotherms can engage in behavioral thermoregulation, seeking out thermally suitable microhabitats within their home ranges (Bogert 1949; Huey et al. 2003; Kearney et al. 2009). At the regional scale, organisms may shift their ranges by migrating along elevation or latitudinal thermal gradients (usually up or north, respectively) to escape warming (Buckley et al. 2013). The degree to which local- and regional-scale behavioral responses can buffer populations from warming depends on numerous factors. For example, behavioral thermoregulation requires fine-scale thermal variation within the environment. However, habitats such as heavily shaded tropical forests have little thermal heterogeneity, precluding behavioral thermoregulation as an effective buffering mechanism (Huey et al. 2009). On the other hand, range shifts can be hindered by factors such as inherent mobility and natural and man-made barriers (Forero&#8208;Medina et al. 2011). Both behavioral thermoregulation and migration can be hindered by the presence of competitors or antagonistic species such as predators or parasites in thermally favorable locations (Araújo & Luoto 2007).

Most work on the evolution of thermal physiology focuses on the evolution of thermal tolerance limits (i.e., the lower and upper lethal temperature thresholds) (Stillman & Somero 2000; Angilletta et al. 2007; Barrett et al. 2011). Broad-scale comparative analyses have demonstrated that upper thermal limits vary less than lower thermal limits, suggesting that upper thermal limits may be evolutionarily constrained (Kellermann et al. 2012; Araújo et al. 2013; Grigg & Buckley 2013). This pattern is particularly strong looking over terrestrial latitudinal gradients; cold tolerance increases with latitude, but heat tolerance does not change appreciably (Sunday et al. 2012). Artificial selection experiments have demonstrated that the upper thermal tolerances of animals can evolve, but there may be limits to how much they can change (Huey et al. 1991; Loeschcke & Krebs 1996).

Physiology, behavior, and evolution are of course not mutually exclusive mechanisms. As noted above, physiological traits such as tolerance to extreme temperature can evolve, as can behavioral mechanisms. In addition, behavior may promote or inhibit the evolution of physiology. For example, behavioral thermoregulation can potentially inhibit the evolution of thermal physiology because it allows organisms to buffer themselves from thermal change (Huey et al. 2003). Furthermore, the physiological state of an organism can dictate how it behaviorally responds to a given stimulus (Atkins-Regan 2005). For example, lizards that are dehydrated seek out cooler microclimates (Crowley 1987).

My dissertation focuses on the physiological, behavioral, and evolutionary axes of organismal response to climatic challenges, and their interactions, using the arboreal Caribbean lizard Anolis cristatellus as a model system. The general approach that I take throughout each chapter is to consider climatic data and organismal responses to climate at a fine-scale. A recent review and meta-analysis of climate change studies found that, on average, researchers consider climatic data at a scale 10,000X larger then the animals they study (Potter et al. 2013). In other words, we frequently consider the climatic environment very coarsely relative to our focal organisms. Such an approach can yield broad patterns of warming vulnerability over large geographic scales. Nonetheless, much of the climatic variation important to organisms occurs at the scale of meters rather than kilometers (Helmuth et al. 2010). Similarly, broad-scale studies must typically make assumptions about how organisms respond to climatic variation, rather than actually measuring responses. Throughout, I highlight the benefits of working at the scale of the organism.

Chapter 1 is the only chapter that does not deal directly with thermal biology. In it, I investigate whether or not A. cristatellus from mesic and xeric habitats differ in their water loss rates, and ask whether the differences that I observe can be explained by plasticity (Gunderson et al. 2011). In the second chapter, I explore the vulnerability of A. cristatellus to climate warming by integrating behavior and physiology with fine-scale measurements of the thermal environment (Gunderson & Leal 2012). In the third chapter, I investigate the ability of thermal tolerance limits to evolve rapidly in response to climatic change using the recent introduction of A. cristatellus to Miami from Puerto Rico (Leal & Gunderson 2012). In the final chapter, I focus solely on behavior and use A. cristatellus to ask how well current models of thermal constraint on activity predict observed patterns at a fine scale in the field (Gunderson and Leal, in review).