Composers on the Decks 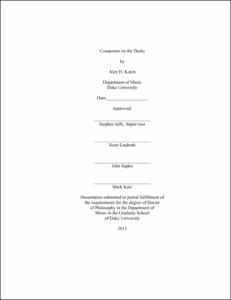 <italic>Composers on the Decks</italic> is comprised of three related chapters: an original composition for amplified chamber ensemble and laptop DJ, <italic>Alleys Of Your Mind</italic>; an extended article entitled "Composers on the Decks: Hybridity of Place and Practice among Composer-DJs Gabriel Prokofiev, Mason Bates, Ari Benjamin Meyers and Brandt Brauer Frick"; and an archive of edited interviews of the four primary research subjects. Chapter 1 is the author's artistic contribution. Chapters 2 and 3 explore the emerging practices of "club classical" and what I am calling "instrumental-electronic dance music" in what may be the first academic study to examine the latter and its connections with the former.

<italic>Alleys of Your Mind</italic> is a work for seven wind instruments, soprano and laptop DJ composed as social dance music, intended to be performed in a nightclub. Its repetitive style, electronic dance beats and long-form instrumental writing create a musical hybrid of classical compositional techniques and electronic dance music (EDM). The work contains three movements: the first and longest movement is paced at a dance tempo of 124 beats-per-minute; the second movement at half of that speed, 62 beats-per-minute; and Movement 3 returns to the original tempo. The movements are performed without pause and leave generous space for the DJ to improvise with audio effects and an extended interlude in Movement 2. In addition, <italic>Alleys Of Your Mind</italic> has a documentary dimension: audio samples of medical machinery and voices, recorded by the composer during his recovery in a neuroscience intensive care unit, feature in the second and third movements.

Chapter 2 introduces the related practices of "club classical" and "instrumental-EDM," explaining the musical connections between contemporary classical and EDM and interpreting the hybrid social environments where this music lives. The first section deals with the club classical phenomenon in the practices of composer-DJs Gabriel Prokofiev and Mason Bates, and presenters such as Yellow Lounge. Prokofiev leads Nonclassical Records and hosts monthly club nights in London, during which live sets of recent classical works alternate with sets from Nonclassical's resident DJs. The label's releases adapt classical music to an EDM format, featuring new classical compositions and electronic remixes of these works. Bates presents Mercury Soul, a party in nightclubs that links DJ sets of EDM with live classical sets via composed, electro-acoustic interludes; these nights involve a director, conductor, and a chamber ensemble from a major symphony. Yellow Lounge situates older classical music in nightclubs and employs DJs who spin classical works between live sets. Ari Benjamin Meyers composes instrumental-EDM, music that features classically influenced composition with a dance focus, and has performed it with his Redux Orchestra in Berlin's late night dance clubs from 2005-2012. Brandt Brauer Frick, an EDM trio, formed an 11-piece ensemble of mostly classical instruments that plays their orchestrated techno-like tracks in clubs and concert halls.

Using social and performance analysis, the chapter describes these phenomena as musical and social hybridity. Club classical and instrumental-EDM evince a desire on the part of event planners and classically trained composers to connect on a more physical and social level with their audience. Many of the composers and presenters express a wish that through these practices, classical music can expand beyond the concert hall and potentially see a demographic change in its audience over time. The chapter also delves into the narrow demographics of the classical-EDM scene, the difficulties of instrumental-EDM, and situates the author's dissertation composition, <italic>Alleys Of Your Mind</italic>, and its presentation at the Duke Coffeehouse, within the greater practice of instrumental-EDM.

Chapter 3 presents edited versions of the author's interviews with the study's four primary research subjects. This documentation, and the dissertation as a whole, is paired with a website, <underline>composersonthedecks.org</underline>, which provides additional information, photographs, links, and audio and video of <italic>Alleys Of Your Mind</italic>.