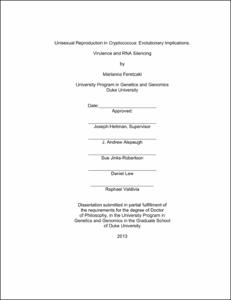 Sexual development enables microbial pathogens to purge deleterious mutations from the genome and drives genetic diversity in the population. <italic>Cryptococcus neoformans</italic> is a human fungal pathogen with a defined sexual cycle. Nutrient-limiting conditions and pheromones induce a dimorphic transition from unicellular yeast to multicellular hyphae and the production of infectious spores. <italic>C. neoformans</italic> has a defined <bold>a</bold>&ndash;&alpha; opposite sexual cycle (bisexual reproduction); however, >99% of clinical and environmental isolates are of the &alpha; mating type. Interestingly, &alpha; cells can undergo &alpha;&ndash;&alpha; unisexual reproduction, even involving genotypically identical cells. A central question is why would cells mate with themselves given that sex is costly and typically serves to admix pre-existing genetic diversity from genetically divergent parents? Sexual reproduction generates abundant spores that following inhalation, they penetrate deep into the alveoli of the lung, germinate, and establish a pulmonary infection growing as budding yeast. Therefore sex has been linked with virulence; however, hyphal development has been previously associated with reduced virulence and thus the roles of morphogenesis in virulence have not been extensively analyzed. To further understand the role of unisexual reproduction in <italic>C. neoformans</italic> we will investigate the evolutionary implications of &alpha;&ndash;&alpha; mating, explore its role in pathogenesis, and we will dissect the signaling pathway that regulates sexual development.

We isolated &alpha;&ndash;&alpha; unisexual reproduction progeny from the hyperfilamentous strain XL280 and subjected to a variety of phenotypic and genotypic assays (including whole genome sequencing and CGH). We found that unisexual and bisexual reproduction frequently generates phenotypic and genotypic diversity de novo, including aneuploidy. Aneuploidy was responsible for the observed phenotypic changes, as chromosome loss restoring euploidy results in a wild-type phenotype. Other genetic changes, including diploidization, chromosome length polymorphisms, SNPs, and indels, were also generated. Our study suggests that the ability to undergo unisexual reproduction may be an evolutionary strategy for eukaryotic microbial pathogens, enabling de novo genotypic and phenotypic plasticity and facilitating rapid adaptation to novel environments, such as the mammalian host.

Interestingly aneuploidy strains that were fluconazole resistant were as virulent as the WT parental strain XL280. Although XL280 belongs to the serotype D lineage that exhibits limited pathogenicity, in further studies we found that is hypervirulent in the murine model. It can grow inside the lung of the host, establishing a pulmonary infection, and then disseminates to the brain to cause cryptococcal meningoencephalitis. Surprisingly, this hyperfilamentous strain triggers an immune response polarized towards Th2-type immunity, which is characterized by less protective immunity and is usually observed in the highly virulent sibling species <italic>C. gattii</italic>, responsible for the Pacific Northwest outbreak. These studies: 1) provide a technological advance that will facilitate analysis of virulence genes and attributes in <italic>C. neoformans</italic> var. <italic>neoformans</italic> (serotype D), and 2) reveal the virulence potential of serotype D that is broader and more dynamic than previously appreciated.

Bisexual and unisexual reproduction are governed by shared components of the conserved pheromone-sensing Cpk1 MAPK signal transduction cascade and by Mat2, the major transcriptional regulator of the pathway. However, the downstream targets of the pathway are largely unknown, and homology-based approaches have failed to yield downstream transcriptional regulators or other targets. To address this question we applied an insertional mutagenesis via <italic>Agrobacterium tumefaciens</italic> transkingdom DNA delivery to identify mutants with unisexual reproduction defects. In addition to elements known to be involved in sexual development (Crg1, Ste7, Mat2, and Znf2), three key regulators of sexual development were identified by our screen: Znf3, Spo11, and Ubc5. Spo11 and Ubc5 promote sporulation during both bisexual and unisexual reproduction. Genetic and phenotypic analyses provide further evidence implicating both genes in the regulation of meiosis. Phenotypic analysis of sexual development showed that Znf3 is required for hyphal development during unisexual reproduction and also plays a central role during bisexual reproduction. Znf3 governs cell fusion and pheromone production through a pathway parallel to and independent of the pheromone signaling cascade. Surprisingly, Znf3 participates in transposon silencing during unisexual reproduction and may serve as a link between RNAi silencing and sexual development. In further studies we found that Znf3 is required for sex- and mitotic-induced (SIS and MIS). SIS is less efficient in <italic>znf3</italic> unilateral matings and is abolished in <italic>znf3</italic> x <italic>znf3</italic> bilateral matings, similar to the phenotypes of <italic>rdp1</italic> mutants (the RNA-dependent RNA-polymerase of RNAi pathway). Znf3 is also required for transgene-induced mitotic silencing; <italic>znf3</italic> mutations abrogate silencing of repetitive transgenes during vegetative growth. Znf3 tagged with mCherry is localized in the cytoplasm in bright, distinct foci. Co-localization of Znf3 with the P-body marker Dcp1-GFP further supports the hypothesis that Znf3 is a novel element of the RNAi pathway and operates to defend the genome during sexual development and vegetative growth. In concussion our studies provide further understanding of unisexual reproduction as an evolutionary successful strategy.