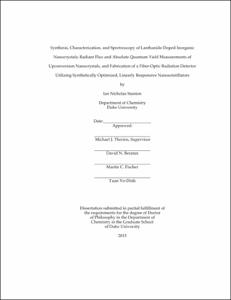 The ability to interrogate structure-function photophysical properties on lanthanide-doped nanoscale materials will define their utility in next-generation applications and devices that capitalize on their size, light-conversion efficiencies, emissive wavelengths, syntheses, and environmental stabilities. The two main topics of this dissertation are (i) the interrogation of laser power-dependent quantum yield and total radiant flux metrics for a homogeneous, solution phase upconversion nanocrystal composition under both continuous wave and femtosecond-pulsed excitation utilizing a custom engineered absolute measurement system, and (ii) the synthesis, characterization, and power-dependent x-ray excited scintillation properties of [Y2O3; Eu] nanocrystals, and their integration into a fiber-optic radiation sensing device capable of in vivo dosimetry.

Also presented is the development and characterization of a scintillating nanocrystalline composition, [Y2-xO3; Eux, Liy], in which Eu and Li dopant ion concentrations were systematically varied in order to define the most emissive compositions under specific x-ray excitation conditions. It is shown that these optimized [Y2-xO3; Eux, Liy] compositions display scintillation responses that: (i) correlate linearly with incident radiation exposure at x-ray energies spanning from 40 - 220 kVp, and (ii) manifest no evidence of scintillation intensity saturation at the highest evaluated radiation exposures [up to 4 Roentgen per second]. X-ray excitation energies of 40, 120, and 220 kVp were chosen to probe the dependence of the integrated emission intensity upon x-ray exposure-rate in energy regimes where either the photoelectric or the Compton effect governs the scintillation mechanism on the most emissive [Y2-xO3; Eux, Liy] composition, [Y1.9O3; Eu0.1, Li0.16]. These experiments demonstrate for nanoscale [Y2-xO3; Eux], that for comparable radiation exposures, when scintillation is governed by the photoelectric effect (120 kVp excitation), greater integrated emission intensities are recorded relative to excitation energies where the Compton effect regulates scintillation (220 kVp excitation).