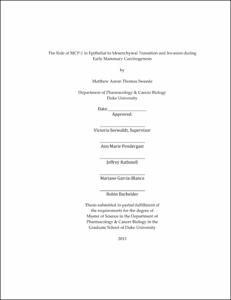 On average, adipose constitutes 70% of the breast. Obesity is a disease of increased adipose tissue, which can increase the adiposity of the breast. Studies show that obesity enhances the production of the inflammatory cytokines IL1&#946;, IL6, IL8, TNF&#945;, and MCP-1 in adipose tissue. Inflammatory cytokines contribute to proliferation and survival of malignant cells, migration and invasion, and induction of epithelial to mesenchymal transition (EMT).

The purpose of this study is to investigate the role of adipose derived cytokines in promotion of EMT and invasion in early mammary carcinogenesis. To study EMT and invasion in early mammary carcinogenesis, a co-culture was generated using adipose stromal cell (ASC) conditioned media and the non-transformed, mammary epithelial cell line MCF10A. ASC-conditioned media was characterized for cytokine production. Findings indicated that IL6, IL8, and MCP-1 were secreted into the media. Researchers have extensively studied IL6 and IL8 in breast EMT, but the relevance of MCP-1 in breast carcinogenesis has only recently emerged. MCP-1 is involved in monocyte and macrophage trafficking, renal fibrosis and EMT, as well as EMT in peritoneal disease. The role of MCP-1 in renal and peritoneal EMT suggests that MCP-1 may induce EMT in mammary epithelial cells.

MCP-1 did not alter the protein expression levels of either E-cadherin or Vimentin in 2D culture. MCP-1 treatment did, however, rapidly phosphorylate Erk1/2 at T202/Y204 and induce chemotaxis of MCF10A cells in a Boyden Chamber migration assay. Erk1/2 phosphorylation and chemotaxis were inhibited by pretreatment with PD98059, a potent small molecule inhibitor of Erk signaling.

In 3D, MCF10A acini treated with MCP-1 lost expression of E-cadherin, &#946;-catenin, and localized areas of Integrin &#945;6. Additionally, MCP-1 induced outgrowth away from the MCF10A spheroids and invasion into the extracellular matrix during a spheroid gel invasion assay. MCP-1 did not induce the secretion of MMP-2 or MMP-9 during invasion. When the MCP-1 treated acini and spheroids were co-treated with PD98059 E-cadherin loss and invasion were inhibited respectively. This inhibition suggests that Erk activation is necessary for E-cadherin loss and cell invasion. The data indicate that MCP-1 plays a potential role in the early EMT and invasion of non-transformed, mammary epithelial cells. This study provides a foundation for the study of MCP-1 induced EMT and invasion in MCF10A cells. Further work will need to be completed to elucidate the mechanism by which MCP-1 decreases E-cadherin and induces invasion.