Spatial Variation of Cardiac Restitution and the Onset of Alternans 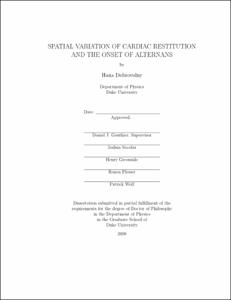 Instability in the propagation of nonlinear electro-chemical waves in the heart is responsible for life-threatening disease. This thesis describes an investigation of the effects of boundaries on cardiac wave propagation that arises from a site where an electrical stimulus is applied or from boundaries beyond which current does not flow. It is generally believed that the spatial scale for boundary effects is approximately equal to the passive length constant, lambda, of the tissue, the distance over which a a voltage pulse decays when it is below the threshold for wave generation. From the results of in vitro experiments with bullfrog cardiac tissue and through numerical simulations, I find that boundaries affect wave propagation over a much larger spatial scale and that the spatial variation in some cardiac restitution properties is correlated statistically with the onset of alternans, a possible precursor to fibrillation in the human heart.

An optical imaging system using novel illumination based on LEDs is used to determine the spatial dependence of action potential duration (APD) and the slope of the dynamic restitution curve SDRC, which describes the relationship between steady-state APD and diastolic interval. For tissue with nearly identical cells, I find that APD is longest near the stimulus and shortest near the physical boundary with significant changes (~100 ms) over a distance of ~10lambda. SDRC decreases with distance from the stimulus at a constant rate (~0.1-1.5 /mm) over the surface of the tissue. Simulations using a two-variable cardiac model confirm that spatial patterns of APD and SDRC can be induced by boundaries.

Additional measurements with the simultaneous impalement of two microelectrodes are used to determine the spatial differences of other restitution properties. These studies indicate that APD and SDRC, as well as the slopes of the constant-BCL and S1S2 restitution curves, vary in space and that the spatial differences and onset of alternans at rapid pacing are correlated. If similar correlations are evident in humans, such measurements may identify patients who are susceptible to arrhythmias and allow for early treatment.