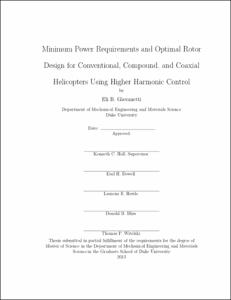 This thesis presents a method for computing the optimal aerodynamic performance of conventional, compound, and coaxial helicopters in trimmed forward flight with a limited set of design variables, including the blade's radial twist and chord distributions and conventional and higher harmonic blade pitch control. The optimal design problem, which is cast as a variational statement, minimizes the sum of the induced and viscous power required to develop a prescribed lift and/or thrust. The variational statement is discretized and solved efficiently using a vortex-lattice technique. We present two variants of the analysis. In the first, the sectional blade aerodynamics are modeled using a linear lift curve and a quadratic drag polar, and flow angles are assumed to be small. The result is a quadratic programming problem that yields a linear set of equations to solve for the unknown optimal design variables. In the second approach, the problem is cast as a constrained nonlinear optimization problem, which is solved using Newton iteration. This approach, which accounts for realistic lift and drag coefficients including the effects of stall and the attendant increase in drag at high angles of attack, is capable of optimizing the blade planform in addition to the radial twist distribution and conventional and higher harmonic blade pitch control. We show that for conventional rotors, coaxial counterrotating rotors, and a wing-rotor compound, using radially varying twist and chord distributions and higher harmonic blade pitch control can produce significant reductions in required power, especially at high advance ratios.