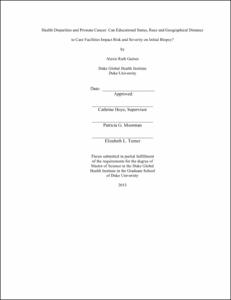 Introduction: Prostate Cancer (PC) screening has become a controversial topic both in the United States and abroad, stimulating debates surrounding who should and should not be screened. United States (USA) population-based studies have established a link between race and PC risk, but whether race predicts PC after adjusting for clinical characteristics is unclear. In Brazil, where cancer registries are limited, underprivileged men have limited access to both education and health care due to geographic barriers. Thus, we investigated the association between, educational status, geographic distance from screening site to follow-up care facility and non-compliance with having cancer, and, risk of low and high-grade PC in men undergoing initial prostate biopsy in equal access medical centers in the USA and Brazil.

Materials & Methods: In our first analysis, we conducted a retrospective record review of 887 men (49.1% black, 50.9% white) from the Durham Veterans Affairs Medical Center (DVAMC) who underwent initial prostate biopsy between 2001 and 2009. Multivariable logistic regression analysis of race and biopsy outcome was conducted adjusting for age, body mass index (BMI), number of cores taken, prostate specific antigen (PSA), and digital rectal exam (DRE) findings. Multinomial logistic regression was used to test the association between black race and PC grade (Gleason <7 vs. >7). Our second analysis used data from the Barretos Cancer Hospital (BCH) screening study, another retrospective record review of 1,561 men who were recommended to prostate biopsy after obtaining an initial screen on the medical mobile units between 2004 and 2007. Multivariable logistic regression analysis of geographic distance from screening site to BCH (km), maximum level of education achieved, and risk of non-compliance was performed adjusting for age and calendar year of biopsy. Among those who complied with biopsy recommendations and received a biopsy (n=850), multivariable logistic regression analyses were conducted to test the association between geographic distance, educational achievement and having PC. Of those men with PC, a multinomial logistic regression test was used to evaluate the association between geographic distance, educational attainment and risk of low and high-grade PC (Gleason <7 vs. >7).

Conclusion: In a USA-based equal access health care facility, black race was associated with greater risk of PC detection on initial biopsy and of high-grade cancer after adjusting for clinical characteristics. In Brazil, where cancer data are limited, education and geographic distance from point of screening to care facility are not associated with having PC on biopsy or biopsy grade. Distance was, however, significantly associated with risk of non-compliance after primary screen. Thus, additional investigation of mechanisms linking black race and PC risk and PC aggressiveness is needed.