Complex Behavior in the Dynamic Response of a Non-smoothly Forced Mechanical System: Numerical and Experimental Investigations 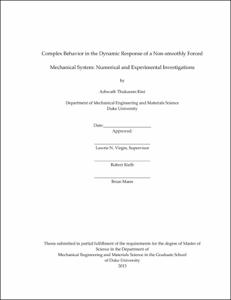 This thesis describes the theoretical and experimental investigations on a non-smooth impacting system consisting of a forced oscillating mass with an impacting barrier, which has the ability to impart energy into the vibrating system. The system is also forced by the means of a sinusoidal excitation using a scotch yoke mechanism. Experiments are conducted to obtain the time delay state-space, time series and Poincare sections. Bifurcation diagrams are obtained by conducting forward and reverse frequency sweep. The obtained results are compared with expected linear non-impacting behavior and interesting phenomena including hysteresis, multiple-period orbits, transient and sustained chaos are observed. Numerical simulations were conducted and correlations were obtained between the theoretical and experimental results.