Learning and memory in bipolar and unipolar major depression: Effects of aging 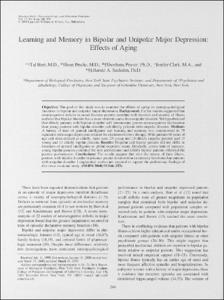 Assistant Professor of Psychiatry and Behavioral Sciences
Tal Burt, MD is a Board-Certified psychiatrist and clinical researcher trained in Israel, Italy, France, and the United States.  After joining the faculty at the Department of Psychiatry at Columbia University, Dr. Burt joined Pfizer Inc., and then Eisai Pharmaceuticals, as Senior Medical Director with responsibilities in all phases of clinical research and development. He then joined Duke and was the founding director of the Investigational Medicine Unit (IMU) in Singapore and th
This author no longer has a Scholars@Duke profile, so the information shown here reflects their Duke status at the time this item was deposited.