Victims of infanticide and conspecific bite wounding in a female-dominant primate: a long-term study. 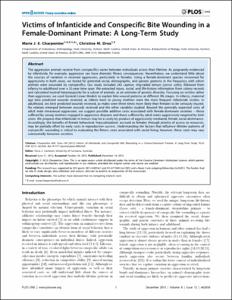 View / Download
1.3 Mb
Date
Authors
Charpentier, Marie JE
Drea, Christine M
Repository Usage Stats
286
views
240
downloads
Abstract
The aggression animals receive from conspecifics varies between individuals across their lifetime. As poignantly evidenced by infanticide, for example, aggression can have dramatic fitness consequences. Nevertheless, we understand little about the sources of variation in received aggression, particularly in females. Using a female-dominant species renowned for aggressivity in both sexes, we tested for potential social, demographic, and genetic patterns in the frequency with which animals were wounded by conspecifics. Our study included 243 captive, ring-tailed lemurs (Lemur catta), followed from infancy to adulthood over a 35-year time span. We extracted injury, social, and life-history information from colony records and calculated neutral heterozygosity for a subset of animals, as an estimate of genetic diversity. Focusing on victims rather than aggressors, we used General Linear Models to explain bite-wound patterns at different life stages. In infancy, maternal age best predicted wounds received, as infants born to young mothers were the most frequent infanticide victims. In adulthood, sex best predicted wounds received, as males were three times more likely than females to be seriously injured. No relation emerged between wounds received and the other variables studied. Beyond the generally expected costs of adult male intrasexual aggression, we suggest possible additive costs associated with female-dominant societies - those suffered by young mothers engaged in aggressive disputes and those suffered by adult males aggressively targeted by both sexes. We propose that infanticide in lemurs may be a costly by-product of aggressively mediated, female social dominance. Accordingly, the benefits of female behavioral 'masculinization' accrued to females through priority of access to resources, may be partially offset by early costs in reproductive success. Understanding the factors that influence lifetime patterns of conspecific wounding is critical to evaluating the fitness costs associated with social living; however, these costs may vary substantially between societies.
Type
Journal article
Subject
Animals
Behavior, Animal
Bites and Stings
Female
Lemur
Male
Permalink
https://hdl.handle.net/10161/8294
Published Version (Please cite this version)
10.1371/journal.pone.0082830
Publication Info
Charpentier, Marie JE; & Drea, Christine M (2013). Victims of infanticide and conspecific bite wounding in a female-dominant primate: a long-term study. PLoS One, 8(12). pp. e82830. 10.1371/journal.pone.0082830. Retrieved from https://hdl.handle.net/10161/8294.
This is constructed from limited available data and may be imprecise. To cite this article, please review & use the official citation provided by the journal.
Collections
More Info
Show full item record Professor in the Department of Evolutionary Anthropology
I have two broad research interests, sexual differentiation and social behavior, both focused on hyenas and primates. I am particularly interested in unusual species in which the females display a suite of masculinized characteristics, including male- like or exaggerated external genitalia and social dominance. The study of naturally occurring hormones in such unique mammals can reveal general processes of hormonal activity, expressed in genital morphology, reproductive development, and