Tackling the NFL: An analysis of the role of the government in workplace safety 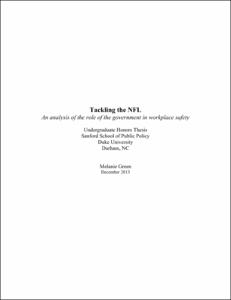 View / Download
1.3 Mb
Date
Author
Green, Melanie
Repository Usage Stats
990
views
3,069
downloads
Abstract
This research analyzes how the federal government can play a role in solving the concussion crisis in the National Football League (NFL). The government has intervened in private sector industries in the past on the grounds of improving safety and health, most notably through the Occupational Safety and Health Act of 1970. The government has intervened in several issues that affect the sports industry, such as antitrust issues and substance abuse, but has not made any significant impact on concussion legislation. Based on three case studies of other industries, the NFL concussion crisis prompts government intervention. However, because the phenomenon is so recent, football is a unique industry, and the NFL has particularly addressed the situation with internal policy, government intervention has not taken place.
Type
Honors thesis
Department
Public Policy Studies
Subject
football
sports
government intervention
workplace safety
concussions
Permalink
https://hdl.handle.net/10161/8297
Citation
Green, Melanie (2014). Tackling the NFL: An analysis of the role of the government in workplace safety. Honors thesis, Duke University. Retrieved from https://hdl.handle.net/10161/8297.
Collections
More Info
Show full item record