Do Different Media Matter? How Newspapers Vary in Their Coverage of Campaigns for State Legislatures. 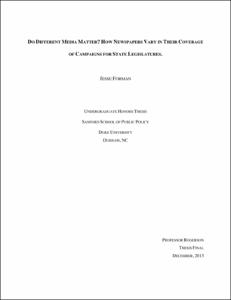 View / Download
1.1 Mb
Date
Author
Forman, Jesse
Repository Usage Stats
263
views
523
downloads
Abstract
This research serves to shed light on a topic that has received little to no prior attention: the ways in which local media report state legislative campaigns. Previous research has tested the relationship between federal elections and the media, but the same cannot be said at the state level. Using a content analysis of The Austin-American Statesman, The Sacramento Bee, and The Columbus Dispatch, the differences and similarities in media reporting between states of different political affinities were tested. A study of newspaper output for six months before Election Day on November 6th found that state legislators are rarely reported in the news at all. In a total of 360 politically relevant articles found in this time span for the three newspapers, only 26 articles contained information about state legislators. This shows that newspapers provide very little coverage of these figures. Although the conclusions drawn from these results were forcibly limited in scope, this research found supporting evidence that incumbency, political party, tone, name placement, and federal coverage all contribute to the explanation of how newspapers cover state legislative campaigns. In the case of The Columbus Dispatch, a swing state newspaper, federal legislators received a much higher degree of attention than the comparative coverage in the other two newspapers.
Type
Honors thesis
Department
Public Policy Studies
Subject
Elections, State Legislator, newspaper, media,
Permalink
https://hdl.handle.net/10161/8310
Citation
Forman, Jesse (2014). Do Different Media Matter? How Newspapers Vary in Their Coverage of Campaigns for State Legislatures. Honors thesis, Duke University. Retrieved from https://hdl.handle.net/10161/8310.
Collections
More Info
Show full item record