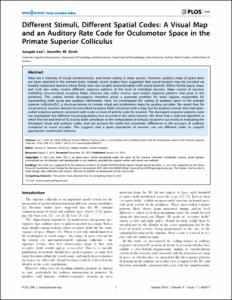 View / Download
2.6 Mb
Date
Authors
Groh, JM
Lee, J
Repository Usage Stats
354
views
438
downloads
Abstract
Maps are a mainstay of visual, somatosensory, and motor coding in many species. However, auditory maps of space have not been reported in the primate brain. Instead, recent studies have suggested that sound location may be encoded via broadly responsive neurons whose firing rates vary roughly proportionately with sound azimuth. Within frontal space, maps and such rate codes involve different response patterns at the level of individual neurons. Maps consist of neurons exhibiting circumscribed receptive fields, whereas rate codes involve open-ended response patterns that peak in the periphery. This coding format discrepancy therefore poses a potential problem for brain regions responsible for representing both visual and auditory information. Here, we investigated the coding of auditory space in the primate superior colliculus(SC), a structure known to contain visual and oculomotor maps for guiding saccades. We report that, for visual stimuli, neurons showed circumscribed receptive fields consistent with a map, but for auditory stimuli, they had open-ended response patterns consistent with a rate or level-of-activity code for location. The discrepant response patterns were not segregated into different neural populations but occurred in the same neurons. We show that a read-out algorithm in which the site and level of SC activity both contribute to the computation of stimulus location is successful at evaluating the discrepant visual and auditory codes, and can account for subtle but systematic differences in the accuracy of auditory compared to visual saccades. This suggests that a given population of neurons can use different codes to support appropriate multimodal behavior.
Type
Journal article
Subject
Acoustic Stimulation
Algorithms
Animals
Primates
Superior Colliculi
Permalink
https://hdl.handle.net/10161/8313
Published Version (Please cite this version)
10.1371/journal.pone.0085017
Publication Info
Groh, JM; & Lee, J (2014). Different stimuli, different spatial codes: a visual map and an auditory rate code for oculomotor space in the primate superior colliculus. PLoS One, 9(1). pp. e85017. 10.1371/journal.pone.0085017. Retrieved from https://hdl.handle.net/10161/8313.
This is constructed from limited available data and may be imprecise. To cite this article, please review & use the official citation provided by the journal.
Collections
More Info
Show full item record