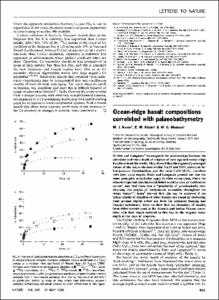 View / Download
425.1 Kb
Date
Authors
Keen, MJ
Klein, EM
Melson, WG
Repository Usage Stats
179
views
154
downloads
Abstract
KLEIN and Langmuir1 investigated the relationships between the chemistry and water depth of eruption of zero-age mid-ocean-ridge basalts around the world. They showed that the regionally averaged values of the major-element oxides Na2O and FeO, corrected for low-pressure fractionation, and the ratio CaO/Al2O3, correlate with their axial depths. Klein and Langmuir pointed out that the same principles should also apply to older ocean crust, where the relationships that they had established could be used as 'calibration curves', and that there was a "possibility of petrologically constraining the origins of bathymetrie anomalies throughout the ocean basins"1. Keen2 showed that this can be achieved if the initial depths of eruption of older basalts are found by correcting their present depths below sea level for sediment loading and thermal subsidence. Here we show that the chemistry of basalts from older oceanic crust in the Atlantic and Indian Oceans correlates with their depth restored in this way to the original water depth at the time of eruption. © 1990 Nature Publishing Group.
Type
Journal article
Permalink
https://hdl.handle.net/10161/8315
Collections
More Info
Show full item record