Belonging in Genesis: Biblical Israel and the Construction of Communal Identity 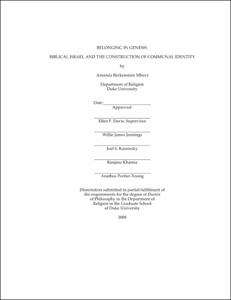 Genesis is central to both hegemonic and counterhegemonic conceptions of communal identity. Read one way, the book undergirds contemporary assumptions about the nature of communality and the categories through which it is constructed. Read another way, however, it undermines them. This project considers these two readings of Genesis, their asymmetrical approaches to the book, and the intersection between them.

From an exegetical standpoint, this study challenges Eurocentrism by finding in Genesis a vision of communality that, in emphasizing the importance of living out the relatedness of all humans to one another and to God, holds the potential for more fruitful relationships between communities. From a methodological standpoint, it offers a reading of Genesis that incorporates features of the text that have been neglected by colonizing readings and avoids the difficulties and internal inconsistencies from which they suffer. Making use of Benedict Anderson's account of the relationship between the imagined community of the nation and religiously imagined communities, as well as Jonathan Sheehan's account of the Enlightenment Bible, this study argues that certain ways of reading the Bible arose to help the West articulate its sense of itself and its others. Drawing attention to the text's reception and the way in which Eurocentric approaches displace Jews and marginalize (the West's) others, this project considers alternative ways of conceptualizing the relationship between the Bible and those who call it their own.