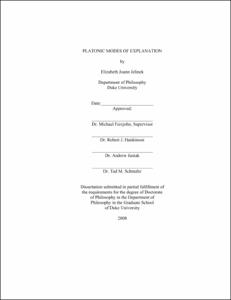 In Platonic Modes of Explanation, I examine Plato's treatment of Form, matter, and telos in his theory of explanation. To focus my investigation of Plato's theory, I adopt an unorthodox approach: that of using Aristotle's critical discussions as a touchstone for developing an interpretation of Plato's doctrines. Ultimately, I conclude that Aristotle's criticism of Plato is misdirected. Contrary to Aristotle's view that Plato excludes material considerations altogether from his explanations, I argue that Plato's theory of explanation involves a sophisticated and complex account of the relationships among form, matter, and telos.

My principal focus is not on whether Aristotle's criticism is ultimately defensible; rather, I use Aristotle's criticism as a point of departure for showing how nuanced and moderate Plato's theory of explanation really is. In Chapter 2, I argue that in the Phaedo, Plato regards teleological explanations as an unattainable ideal and favors a mode of explanation involving both Form and matter. In contrast to what traditional interpretations suggest, Plato does see matter as playing an integral role in explanations of the natural world. Chapter 3 builds upon the argument that the Theory of Forms is completely separate from Platonic teleology by investigating Plato's enigmatic descriptions of the Form of the Good in The Republic. It is tempting to interpret the Form of the Good as some kind of force that directs the processes of nature in ways that maximizes the Good. This would be a convenient way of wedding teleology with the Theory of Forms. I argue, however, that the account of the Form of the Good in the Republic supports the claim that the Forms and teleology are two distinct forces at work. Chapters 4 and 5 focus on the Timaeus, a dialogue in which Plato fully develops the theory of explanation he offers in the Phaedo and the Republic. I show that Plato holds that matter, Form, and telos all figure in legitimate explanations concerning the formation of the sensible world. More specifically, I argue that matter plays a central role in Plato's explanations. As a result of my investigations, I conclude that the characterization of Plato as an extreme formalist and teleologist is overly simplistic. What emerges instead is a more subtle and nuanced picture of Plato's development of explanation that is far richer than Aristotle's portrayal.