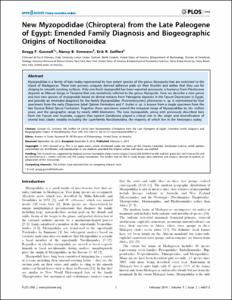 View / Download
991.0 Kb
Date
Authors
Gunnell, Gregg F
Simmons, Nancy B
Seiffert, Erik R
Repository Usage Stats
279
views
290
downloads
Abstract
Myzopodidae is a family of bats today represented by two extant species of the genus Myzopoda that are restricted to the island of Madagascar. These bats possess uniquely derived adhesive pads on their thumbs and ankles that they use for clinging to smooth roosting surfaces. Only one fossil myzopodid has been reported previously, a humerus from Pleistocene deposits at Olduvai Gorge in Tanzania that was tentatively referred to the genus Myzopoda. Here we describe a new genus and two new species of myzopodids based on dental remains from Paleogene deposits in the Fayum Depression in Egypt, and provide an emended diagnosis for the family Myzopodidae. Phasmatonycteris phiomensis n. sp. is represented by four specimens from the early Oligocene Jebel Qatrani Formation and P. butleri n. sp. is known from a single specimen from the late Eocene Birket Qarun Formation. Together these specimens extend the temporal range of Myzopodidae by 36+ million years, and the geographic range by nearly 4000 kilometers. The new myzopodids, along with previously described bats from the Fayum and Australia, suggest that eastern Gondwana played a critical role in the origin and diversification of several bats clades notably including the superfamily Noctilionoidea, the majority of which live in the Neotropics today.
Type
Journal article
Permalink
https://hdl.handle.net/10161/8366
Published Version (Please cite this version)
10.1371/journal.pone.0086712
Publication Info
Gunnell, Gregg F; Simmons, Nancy B; & Seiffert, Erik R (2014). New Myzopodidae (Chiroptera) from the Late Paleogene of Egypt: Emended Family Diagnosis and Biogeographic Origins of Noctilionoidea. PLoS One, 9(2). 10.1371/journal.pone.0086712. Retrieved from https://hdl.handle.net/10161/8366.
This is constructed from limited available data and may be imprecise. To cite this article, please review & use the official citation provided by the journal.
Collections
More Info
Show full item record

Adjunct Associate Professor in the Department of Evolutionary Anthropology
This author no longer has a Scholars@Duke profile, so the information shown here reflects their Duke status at the time this item was deposited.