Ubiquitylation of p53 by the APC/C inhibitor Trim39. 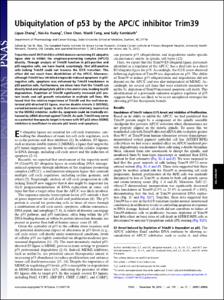