Apoptosis in Drosophila: neither fish nor fowl (nor man, nor worm). 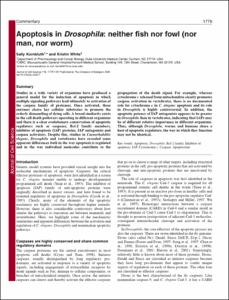 View / Download
159.7 Kb
Date
Authors
Kornbluth, Sally
White, Kristin
Repository Usage Stats
211
views
265
downloads
Abstract
Studies in a wide variety of organisms have produced a general model for the induction of apoptosis in which multiple signaling pathways lead ultimately to activation of the caspase family of proteases. Once activated, these enzymes cleave key cellular substrates to promote the orderly dismantling of dying cells. A broad similarity exists in the cell death pathways operating in different organisms and there is a clear evolutionary conservation of apoptotic regulators such as caspases, Bcl-2 family members, inhibitor of apoptosis (IAP) proteins, IAP antagonists and caspase activators. Despite this, studies in Caenorhabditis elegans, Drosophila and vertebrates have revealed some apparent differences both in the way apoptosis is regulated and in the way individual molecules contribute to the propagation of the death signal. For example, whereas cytochrome c released from mitochondria clearly promotes caspase activation in vertebrates, there is no documented role for cytochrome c in C. elegans apoptosis and its role in Drosophila is highly controversial. In addition, the apoptotic potency of IAP antagonists appears to be greater in Drosophila than in vertebrates, indicating that IAPs may be of different relative importance in different organisms. Thus, although Drosophila, worms and humans share a host of apoptotic regulators, the way in which they function may not be identical.
Type
Journal article
Subject
Animals
Apoptosis
Caspases
Cytochromes c
Drosophila melanogaster
Enzyme Inhibitors
Humans
Models, Biological
Proto-Oncogene Proteins c-bcl-2
Permalink
https://hdl.handle.net/10161/8399
Published Version (Please cite this version)
10.1242/jcs.02377
Publication Info
Kornbluth, Sally; & White, Kristin (2005). Apoptosis in Drosophila: neither fish nor fowl (nor man, nor worm). J Cell Sci, 118(Pt 9). pp. 1779-1787. 10.1242/jcs.02377. Retrieved from https://hdl.handle.net/10161/8399.
This is constructed from limited available data and may be imprecise. To cite this article, please review & use the official citation provided by the journal.
Collections
More Info
Show full item record