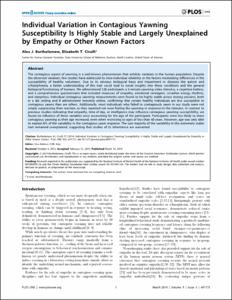 View / Download
419.8 Kb
Date
Authors
Bartholomew, A
Cirulli Rogers, Elizabeth T
Repository Usage Stats
1,212
views
1,254
downloads
Abstract
The contagious aspect of yawning is a well-known phenomenon that exhibits variation in the human population. Despite the observed variation, few studies have addressed its intra-individual reliability or the factors modulating differences in the susceptibility of healthy volunteers. Due to its obvious biological basis and impairment in diseases like autism and schizophrenia, a better understanding of this trait could lead to novel insights into these conditions and the general biological functioning of humans. We administered 328 participants a 3-minute yawning video stimulus, a cognitive battery, and a comprehensive questionnaire that included measures of empathy, emotional contagion, circadian energy rhythms, and sleepiness. Individual contagious yawning measurements were found to be highly stable across testing sessions, both in a lab setting and if administered remotely online, confirming that certain healthy individuals are less susceptible to contagious yawns than are others. Additionally, most individuals who failed to contagiously yawn in our study were not simply suppressing their reaction, as they reported not even feeling like yawning in response to the stimulus. In contrast to previous studies indicating that empathy, time of day, or intelligence may influence contagious yawning susceptibility, we found no influence of these variables once accounting for the age of the participant. Participants were less likely to show contagious yawning as their age increased, even when restricting to ages of less than 40 years. However, age was only able to explain 8% of the variability in the contagious yawn response. The vast majority of the variability in this extremely stable trait remained unexplained, suggesting that studies of its inheritance are warranted.
Type
Journal article
Permalink
https://hdl.handle.net/10161/8402
Published Version (Please cite this version)
10.1371/journal.pone.0091773
Publication Info
Bartholomew, A; & Cirulli Rogers, Elizabeth T (2014). Individual Variation in Contagious Yawning Susceptibility Is Highly Stable and Largely Unexplained by Empathy or Other Known Factors. PLoS One, 9(3). 10.1371/journal.pone.0091773. Retrieved from https://hdl.handle.net/10161/8402.
This is constructed from limited available data and may be imprecise. To cite this article, please review & use the official citation provided by the journal.
Collections
More Info
Show full item record Adjunct Assistant Prof in the Department of Molecular Genetics and Microbiology
Liz is interested in the genetics underlying normal variation in healthy humans, with a focus on traits relevant to disease and involving neuronal function, for example cognitive performance, face recognition, and time perception. She is also interested in applying genome sequencing for disease gene discovery and in studying people with extreme traits, such as those living to at least 100 years of age.