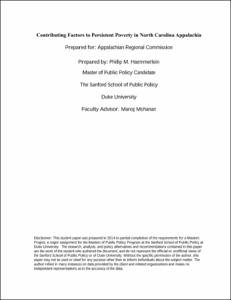 View / Download
1.2 Mb
Date
Author
Haemmerlein, Philip
Advisor
Mohanan, Manoj
Repository Usage Stats
395
views
1,483
downloads
Abstract
Executive Summary Policy Question (p.1) Why have the North Carolina (NC) Appalachian counties of Graham, Swain, and Rutherford remained “distressed” while certain other NC Appalachian counties improved their economic conditions over the last several decades? Can actions taken in NC Appalachian “success stories” be replicated in the three current distressed counties? Contributing Factors to Poverty in Appalachia (p.6) We found that poverty is persistent in Appalachia due primarily to geographic isolation. We found that geographic isolation in NC Appalachia is especially problematic and leads to: • Poor access to education. • Limitations on trade with other communities. • Limited or nonexistent access to quality healthcare, leading to poor health outcomes. The Distressed Counties (p. 14) Congressional legislation formed the Appalachian Regional Commission (ARC) in 1965. At that time the ARC found that 25 of the 29 NC Appalachian counties were distressed. The NC Appalachian Counties that were distressed when Congress established the ARC almost 50 years ago and are now currently distressed are: • Graham County, NC • Rutherford County, NC • Swain County, NC Methodology (p.20) We compared per capita market income of each of these 25 counties over the last fifty years in roughly ten year intervals (1959, 1969, 1979, 1989, 2007, and 2010). Per capita market income is defined as the mean money income received in the past 12 months computed for every man, woman, and child in a geographic area, usually denoted in a metropolitan city, county, state, or nation. It is computed by dividing the total income, less transfer payments (i.e. welfare payments, other entitlement monetary compensation) of all people 15 years old and over in a geographic area by the total population in that area. We noted that income is not collected for people under 15 years old even though those people are included in the denominator of the per capita income calculation. By comparing these averages we could clearly establish along a single dimension what counties experienced the most substantial growth in earnings since the ARC implemented economic development policies in the region. We wanted to discover which NC Appalachian counties sustained substantial per capita income growth over the life of ARC (1965 to present). We selected multiple counties and conducted qualitative research to see what, if any, economic development initiatives or growth-model incentives occurred in these prosperous counties and how successful they were. Success Stories to Emulate (p.23) We found that the three counties that experienced the most per capita market income growth relative to their base position in 1959 are: • Macon County, NC • Madison County, NC • Watagua County, NC Findings/Recommendations (p.29) We found that the three common themes in the research suggested the following: • Access to quality education helps per-capita market income progression. • Health outcomes and persistent poverty exist in parallel. • Consider revising ARC’s economic classification system. The “success story” counties had much better educational outcomes (i.e. high school and college attainment rates) and better health outcomes (i.e. access to healthcare, lower incidences of smoking, alcohol dependence, etc.). ARC should expand its classification system from five (distressed, at-risk, transitional, competitive, and attainment) to ten categories that align with ten sets of percentile ranges. By doing this there will be greater distinctions between the levels of economic classifications, and policymakers can tailor specific economic development programs accordingly.
Type
Master's project
Department
The Sanford School of Public Policy
Subject
Appalachia
Permalink
https://hdl.handle.net/10161/8432
Citation
Haemmerlein, Philip (2014). Contributing Factors to Persistent Poverty in North Carolina Appalachia. Master's project, Duke University. Retrieved from https://hdl.handle.net/10161/8432.
Collections
More Info
Show full item record