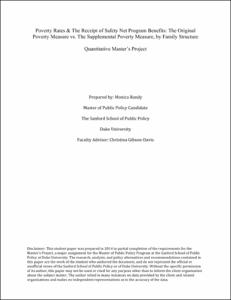 View / Download
1.7 Mb
Date
Author
Bandy, Monica
Advisor
Gibson-Davis, Christina M
Repository Usage Stats
308
views
1,823
downloads
Abstract
Executive Summary Policy Question This project addresses two policy questions. The first policy question seeks to address how poverty rates vary by family structure using the original poverty measure vs. the Supplemental Poverty Measure (SPM). The second policy question investigates how the receipt of four safety net program benefits (SNAP, WIC, TANF, and the EITC) affect the poverty rate using the SPM, by family structure. Background The original poverty measure was developed in 1963 (Fisher 1992). The poverty measure is an incredibly important measure, as it determines who is poor in the United States and is often used as a threshold to determine eligibility for government benefit programs. Aside from adjustments for inflation, the poverty measure has changed little since its inception (Fisher 1992). The original poverty measure has many limits and recently a new measure was created to more accurately measure poverty (Smith 2009). The new measure is called the Supplemental Poverty Measure (SPM), and includes several enhancements to the original poverty measure. The SPM includes adjustments for geographic location, in-kind benefits such as SNAP and WIC, transportation, healthcare, childcare costs, and modern family configuration including resource sharing among unmarried partners (commonly known as cohabiting couples) (Short 2013). I investigated the anti-poverty effects of four social safety net programs SNAP, WIC, TANF, and the EITC. I looked at these programs in particular because they serve my population of interest, families with children. Data & Methodology I used data from the Current Population Survey (CPS), a nationally representative survey of the non-institutionalized American population. The CPS collects detailed information on household income and structure, and is one of the preeminent sources of information on American well-being. My primary variable of interest was family structure; I classified families with children into four categories, married, cohabiting, never-married, and divorced. For more information about variable definitions and the CPS and ASEC, please see pages 20-22 of this paper. To determine the relative anti-poverty effects of SNAP, WIC, TANF, and the ETIC, I calculated the relative change in poverty status for each of the four family structures if that benefit was excluded. For more information about the modeling approach please see pages 22-23 of this paper. I then ran weighted means in STATA subtracting one federal safety net program out from the estimation of total resources and observed the change in the poverty rate. I ran all of these calculations by family structure. Findings Regarding the difference in poverty levels between the original and Supplemental Poverty level (policy question #1), I found that the relative ranking of family structures by poverty status was consistent. Married families had the lowest poverty rates, followed by cohabiting families, followed by one-parent households. A within-family comparison of the poverty and the SPM, however, indicated that most families had lower levels of poverty. For example, the poverty rate of White never married mothers under the old poverty measure was 33.3 percent, but the poverty rate of white never married mothers using the Supplemental Poverty Measure is 27.5 percent. In terms of the poverty impact of the four social programs (policy question #2), three general conclusions emerged. First, two-parent families (married and cohabiting families) are associated with smaller increases in poverty rates when benefits are excluded, relative to single-parent (never-married and divorced) families. Second, historically disadvantaged populations, such as families headed by people of color or with low levels of educational attainment, are associated with the largest increases in poverty rates when benefits are excluded. Third, across programs the EITC has the largest anti-poverty effect. For more information about findings for the second policy question please see pages 38-47 of this paper. Policy Relevance The findings from this project show that the impact of safety net program benefit receipt varies by family structure, and by program. As the American economy continues to recover from the Great Recession, the correct funding levels for social safety net programs continues to be a subject of constant debate. Cutting or expanding funding for social safety net programs will have different effects on different types of family structures. Those family structures that have higher utilization rates of safety net programs will be most affected. Overall, families headed by a never-married mother are the most vulnerable to increases in the poverty rate when safety net program benefits are cut, and married mothers are the least vulnerable. The program with the strongest anti-poverty effect for all family structures is the EITC.
Type
Master's project
Department
The Sanford School of Public Policy
Subject
Supplemental Poverty Measure, Family Structure
Permalink
https://hdl.handle.net/10161/8447
Citation
Bandy, Monica (2014). Poverty Rates & The Receipt of Safety Net Program Benefits: The Original Poverty Measure vs. The Supplemental Poverty Measure, by Family Structure. Master's project, Duke University. Retrieved from https://hdl.handle.net/10161/8447.
Collections
More Info
Show full item record