How do urban people in China form stigmatization on rural-to-urban migrant children? 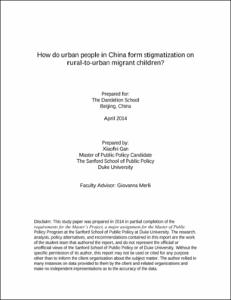 View / Download
1.1 Mb
Date
Author
Gan, Xiaofei
Advisor
Merli, M Giovanna
Repository Usage Stats
916
views
843
downloads
Abstract
1. Introduction and problem statement Since China’s economic reform 30 years ago, it started to experience the most extensive internal rural-to-urban migration. According to the Sixth National Population Census in 2010, there are a total number of 260 million migrants, among which 42 million are migrant children aged from 0 to 14. Although migrant populations are the engines of China’s spectacular economic growth, previous studies on migrant workers and migrant children showed that they experience institutional, interpersonal discrimination and stigmatization in the host cities. Academia has not reached a single definition of stigma and stigmatization. But most described stigma as having an attribute that is socially salient to others. This attribute is also associated with undesirable and negative stereotypes, which further leads to separation, discrimination and status loss. Previous studies also showed that stigma has negative effects on children because it would reduce their self-esteem and confidence. They are more vulnerable than adults because they do not have control over the situation. Long-term exposure to stigma will lead to withdrawal, depression and other psychological problems. Previous studies on stigma showed that a full understanding about the process and content of stigma helped combat stigma. As a result, in order to prevent the negative outcomes and reduce stigma, the Dandelion School proposed this study to gain a deeper understanding about stigma toward migrant children. The main purpose of this study, as required by the client, was to explore how urban residents form stigmatization on migrant children. Thus, this study generated implications for the client to conduct anti-stigma campaigns in future. 2. Data and methodology This study adopted Link and Phelan’s conceptualizing of stigma as the framework. Following this framework, the study explored how urban residents label, stereotype and separate migrant children. It also analyzed why urban residents stigmatize migrant children. Considering the exploratory nature, this study used in-depth interviews with the perpetrators of stigma. This study adopted several criteria for recruiting interviews participants to reflect a wide range of educational level, occupation, age, gender, marital status and home location. Parent and teacher participants were referred by the author’s English teacher in middle school. The rest were voluntarily recruited online. Interviews were conducted via face-to-face and telephone. Based on interview questions that have been tested by previous studies, the author prepared a list of questions to cover during the conversion. The questions were divided based on the framework of stigma. But questions varied according to the proceeding of the conversation. 3. Key findings This study found that, similar to urban residents’ impression about migrant workers, attributes that lead to labeling include appearance, facial expression, behavior in public and manner of speaking. Because of a lack of matched colors and low quality, migrant children’s overall clothing gave a sense of mess and disarray. Since they lived a marginalized life in the host city, they acted timid, avoided eye contact and violated social norm in public area. Their strong regional accent was salient in the host city where the local dialect is prevalent. Participants depicted migrant children in a way similar to that of migrant workers because traditional Chinese belief thinks that parents are the teacher of their children. Thus, in the eye of urban residents, migrant children were believed to be lacking discipline and bad mannered. Influenced by media news and stereotypes about migrant workers, they also believed that migrant children received little supervision from their parents thus acting reckless. But migrant children are more innocent and simpler than urban children because they care less about material pursuit and comparison. This study identified four reasons why participants separated and rejected migrant children. The most frequently mention reason was the huge difference in culture, lifestyle and custom. Participants, particularly those with little children, were afraid that migrant children would negatively affect their young children. Some participants believed that the huge difference in living standard would automatically and gradually separate migrant children from urban people. A small number of participants regarded the institutional difference in Hukou status. Participants stigmatized migrant children mainly because they regarded themselves as the ingroup. Based on the ingroup favoritism theory, urban people stigmatize the outgroup, migrant children, when they perceive potential threats from them. Potential threats include cultural invasion and occupying of public resources. Some also stigmatized because they would like to maintain the status quo. Urban residents were in an absolute advantageous position over migrant children. Thus, they justified their stigmatization hoping to maintain the advantage. 4. Implication This study found that, consistent with the literature on stigma, the process of stigmatization happened almost automatically. This automatic nature posed huge difficulty in reducing stigma. Thus, in order to combat the stigma on migrant children and change the stereotypes, campaigns should target on the young generation who are still forming their views. The most popular social media site in China, Sina Weibo, was therefore identified as an ideal platform because of its large young users. The client suggested an anti-stigma educational campaign that contrasts the stereotypes and incorrect beliefs about migrant children. Thus, in order to be effective, the educational campaign should provide information and examples about migrant children that are inconsistent with the stereotypes suggested in the key findings. It should also focus on why the perpetrators stigmatize providing information that relieves the concerns that give rise to urban residents’ separation and stigmatization.
Type
Master's project
Department
The Sanford School of Public Policy
Subject
Stigma
Migrant children
China
Permalink
https://hdl.handle.net/10161/8453
Citation
Gan, Xiaofei (2014). How do urban people in China form stigmatization on rural-to-urban migrant children?. Master's project, Duke University. Retrieved from https://hdl.handle.net/10161/8453.
Collections
More Info
Show full item record