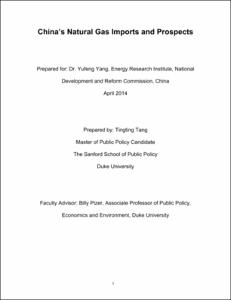 View / Download
2.0 Mb
Date
Author
Tang, Tingting
Advisor
Pizer, William Aaron
Repository Usage Stats
356
views
8,722
downloads
Abstract
The project provides an overview of China’s current natural gas imports and key factors impacting its future imports. As part of its strategy to pursue cleaner energy sources, the Chinese government has pledged to consume more natural gas, which has historically been underrepresented in the country’s energy mix. To achieve its natural gas consumption goal, China’s demand for imported natural gas is expected to reach 124 billion cubic meters in 2020, more than tripling its imports in 2012 of 38 billion cubic meters. Cheap and abundant gas in the U.S., as a result of the shale gas revolution, has generated enormous interest in China about the possibility of importing LNG from the U.S. However, uncertainties surrounding U.S. natural gas export policies reinforced China’s impression that importing gas from the U.S. may be a difficult and prolonged process. Several studies predict that the future influx of gas from the U.S. into the international market will lead to a decline in natural gas prices worldwide. As a result, even if China does not import LNG from the U.S., it is likely to benefit from the decrease in LNG prices in the global market. The mere possibility of importing gas from the U.S. has given China more leverage in its negotiations with Russia over the China-Russia gas pipeline. Given the recent progress the two countries have made in their negotiations, it is expected that Russia and China will finalize the gas pipeline agreement by the end of 2014. By 2020, the pipeline is expected to deliver 68 billion cubic meters of gas annually from Russia to China, meeting more than half of China’s total demand for imported gas. A secured supply of pipeline gas from Russia may depress China’s appetite for LNG imports from additional sources including the U.S. In addition, China’s domestic factors – including the gas tariff mechanism and regulations on import rights and infrastructure – will impact its future LNG imports. The current state-mandated gas tariff mechanism in China has led to losses of gas importing companies, since the mandated gas prices are not sufficient to cover the costs of imported gas. High barriers for any non-state capital to enter the gas-importing sector have further hindered efficient investments made along the LNG import value chain. Favorable regulatory reforms will incentivize Chinese companies, in particular non-state enterprises, to pursue cheaper natural gas supplies overseas, thereby increasing China’s competitiveness as a gas importer in the international market.
Type
Master's project
Department
The Sanford School of Public Policy
Subject
China's natural gas imports
Permalink
https://hdl.handle.net/10161/8459
Citation
Tang, Tingting (2014). China's Natural Gas Imports and Prospects. Master's project, Duke University. Retrieved from https://hdl.handle.net/10161/8459.
Collections
More Info
Show full item record