How to end the hook-up culture: An economic and institutional examination of the hook- up culture on college campuses 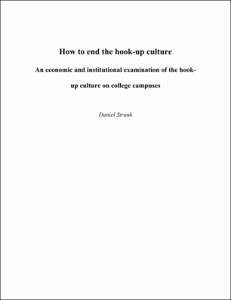 View / Download
4.7 Mb
Date
Author
Strunk, Daniel
Repository Usage Stats
1,019
views
11,740
downloads
Abstract
The hook-up culture that exists amongst modern day college students is a well-documented phenomenon in sociological, psychological, and gender studies research, but little to no research exists examining such a culture from an economic or institutional perspective. This paper provides a definitional summary of the literature on the hook-up culture, examining its social norms, origins, and harms, and adds that the hook-up culture can be conceptualized as an economic club good. Borrowing upon Gerry Mackie’s work, it then argues that the hook-up culture can be viewed as a societal convention analogous to the historic Chinese practice of footbinding and the modern day practice of Female Genital Mutilation. Importantly, the author does not claim that the hook-up culture harms men and women to the same degree as footbinding or FGM. Both footbinding and FGM are degrees of magnitude more harmful and more demoralizing than the hook-up culture—and it would be offensive to argue otherwise. Instead, the author’s point in making the comparison is solely structural: when each of the three conventions persist, they persist because those harmed cannot socially coordinate. Thus, to understand how to end the hook-up culture, it is helpful to understand how similar conventions ended (or could end). The paper then provides three frameworks for “solving” the harms the hook-up culture propagates.
Description
Thesis granted Honors by the Duke Political Science Department (2014)
Type
Honors thesis
Department
Political Science
Subject
Hook-up culture
Hook-up
Gender norms
Club good
Institutional analysis
Game theory
Permalink
https://hdl.handle.net/10161/8470
Provenance
Abstract revised in January 2021 at request of author and with approval from DUL administrators.
Citation
Strunk, Daniel (2014). How to end the hook-up culture: An economic and institutional examination of the hook- up culture on college campuses. Honors thesis, Duke University. Retrieved from https://hdl.handle.net/10161/8470.
Collections
More Info
Show full item record