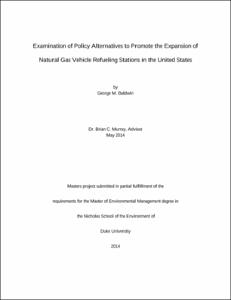 View / Download
1.1 Mb
Date
Author
Baldwin, George
Advisor
Murray, Brian
Repository Usage Stats
409
views
961
downloads
Abstract
In the United States, nearly a third of our energy is consumed by gasoline and diesel fueled vehicles which emit harmful by-products such as nitrogen oxide, particulate matter, and 28% of the U.S. greenhouse gas emissions. Consequently, concerns about these emissions have created interest in alternative and innovative transportation options. One developing option is the use of compressed natural gas (CNG) to operate vehicles. Natural gas is the cleanest of all fossil fuels, and can be used to reduce transportation sector-related carbon monoxide emissions by 90-97%, carbon dioxide emissions by 25%, and nitrogen oxide emissions by 35%. Additionally, the increased use of natural gas can reduce pollutants in non-attainment areas, and also support our country’s effort to meet the National 2020 greenhouse gas emission reduction target of 17%. The natural gas vehicle (NGV) market can be economically viable due to relatively inexpensive equivalent natural gas prices of $2/gallon including taxes. One outstanding obstacle in this market’s development is the inadequate number of fueling stations in this country. Despite the 11% annual growth rate for CNG fueling stations in the U.S. since 2009, the number of these stations as compared to retail gasoline outlets remains less than 1%. The capital intensive nature and associated risk of investing in these fueling stations has resulted in an under-developed refueling system network. Absent policy support to subsidize the investment for publicly accessible fueling stations, this network remains generally unavailable to most automobile operators, and fails to maximize the full societal benefit of using natural gas in the transportation sector. This public use will be impossible to achieve without continued efforts from the private sector, and increased federal, state and local policy participation from government. It will be important to integrate these components to form a comprehensive economic and environmental solution to today’s existing high vehicle fuel prices, and transportation sector emissions. The expansion of a publicly accessible CNG refueling station network to sustain this market will entail significant collaboration, investment and sharing of associated risk.
Type
Master's project
Department
Nicholas School of the Environment and Earth Sciences
Permalink
https://hdl.handle.net/10161/8471
Citation
Baldwin, George (2014). Examination of Policy Alternatives to Promote the Expansion of Natural Gas Vehicle Refueling Stations in the United States. Master's project, Duke University. Retrieved from https://hdl.handle.net/10161/8471.
Collections
More Info
Show full item record