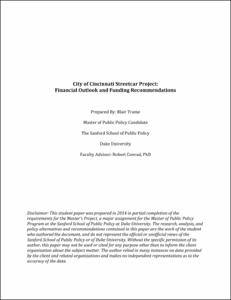 View / Download
2.9 Mb
Date
Author
Trame, P. Blair
Advisor
Conrad, Robert
Repository Usage Stats
378
views
368
downloads
Abstract
In 2016, the City of Cincinnati will begin operating its 3.6-mile urban circulator streetcar system. This report analyzes the financial impact to the city and is based on the attached Flow of Funds Statement. Though the city is receiving $45 million in federal grants to fund the project, the capital costs burden falls largely on the city. After including private contributions and other external inflows, the city is responsible for $82 million of the capital costs, and has set aside an additional $15 million should it have to pay for utilities relocation. Projected revenues from the system include: fare revenue, pavement maintenance savings, liquidation of the system, and incremental property tax revenue. Baseline fare revenue projections, assuming a $1.00 fare and initial daily demand of 3,700 riders, predict that the system will recover 42% of operational and maintenance (O&M) costs in the first full year of operation. However, as O&M costs rise at a higher rate than ridership, this ratio is expected to decline to 27% by 2035. This translates to a $1.8 million deficit and $5.4 million deficit in 2017 and 2035, respectively. The financial viability of the system depends on the city’s ability to decrease the rate of O&M cost growth and/or increase ridership. Fare revenue should only be expected to account for a portion of O&M costs. Sensitivity analysis was conducted to show the effects of a range of variables on fare revenue and incremental property tax revenue. These ranges provide a range of estimates of the operating shortfall and should be used to guide decisions on how to fund the shortfall. It is highly unlikely that the system will be self-sustaining. A combination of advertising revenue, tax increment financing, private contributions, along-the-line assessments, and special improvement district revenue should be used to account for the remaining costs. Use of city general fund revenue should be avoided at all costs, so as to not disrupt current city service delivery.
Type
Master's project
Department
The Sanford School of Public Policy
Subject
transportation, streetcar, cincinnati, rail, transit
Permalink
https://hdl.handle.net/10161/8472
Citation
Trame, P. Blair (2014). City of Cincinnati Streetcar Project: Financial Outlook and Funding Recommendations. Master's project, Duke University. Retrieved from https://hdl.handle.net/10161/8472.
Collections
More Info
Show full item record