The Perplexing Policy Status of the Simpson-Bowles Fiscal Package: A Case Study Analysis 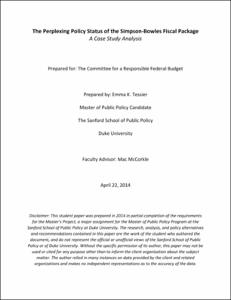 View / Download
625.1 Kb
Date
Author
Tessier, Emma
Advisor
McCorkle, Mac
Repository Usage Stats
309
views
417
downloads
Abstract
The Committee for a Responsible Federal Budget (CRFB) is a bipartisan, non-profit, non-governmental organization committed to education and promotion of a responsible budget process. CRFB is currently working on the Moment of Truth Project promoting the Simpson-Bowles report from the National Commission on Fiscal Responsibility and Reform. In support of CRFB I have put together a report to (1) establish how the fiscal commission developed the Simpson-Bowles policy package, (2) understand how the media framed the package and how it affected public opinion, and (3) use John Kingdon’s garbage can model to question whether Simpson-Bowles has a policy future. Section I: A “Legislative” History on the Simpson-Bowles Package: In this section I trace the fiscal commission from its start in February 2010 through the final vote in December. I discuss the varied expectations for the commission, their structure and sources of policy ideas, how they negotiated with outside groups and commission members, the reasoning behind members’ votes, the immediate criticism Simpson-Bowles received, and what has changed since 2010. While this section doesn’t draw any conclusions, it analyzes where the policy ideas came from, discusses the different players who had a stake in the outcome, and highlights the key decisions and how they were made. Section II: The Media Framing of the Simpson-Bowles Package: The press often refers to Simpson-Bowles in broad, vague, or even misleading terms. This section discusses how the package was framed by the media and the general consensus among newspapers across the country. I look at editorials from regional newspapers and compare their content to coverage in the New York Times or Washington post. My analysis shows that Simpson-Bowles was received well by the media, and was lauded as “good government” and unlikely compromise. However, it also warns that by not educating the public on the content of the proposals in the package, the “good government” argument may break down. Section III: The Public Response to the Simpson-Bowles Package: In conjunction with the media analysis, I look at public polling data on Simpson-Bowles to measure the public’s response. The data help inform whether the discussion surrounding the package has caused a shift in overall public awareness for fiscal problems as well as the most effective ways of discussing particular elements of the package. For example, support for proposed changes in Social Security and Medicare were low, but when packaged with other ideas (such as closing tax loopholes) or qualified by protecting lower-income groups levels of support increased significantly. This section highlights the importance of question specificity when gauging public opinion. Section IV: The Simpson-Bowles Package & the Policy Stream: Are They Still Alive?: The public narrative, as seen in the media and public response, tells a mixed story. The current state, and future, of the Simpson-Bowles package appears uncertain at best. Nevertheless, there is reason to believe that the package is still viable. In this section I apply John Kingdon’s garbage can model to the Simpson-Bowles package, and show how the policy may still be alive. This model says that problems, policy ideas, and politics exist as three independent processes, but you don’t see real action until all three come together. Meanwhile, ideas are in the garbage can waiting until the right time. Today our fiscal problems still exist, and Simpson-Bowles may be the go-to policy plan, but the package has yet to earn the political endorsements needed to move it forward. Section V: Simpson-Bowles: Lessons Learned: • Simpson-Bowles lost traction because it lacked political support. In the future, support from Congressional leadership and especially the President would help the package. • The media generally support Simpson-Bowles as centrist and a meaningful compromise, but also have not educated the public on the content. The package’s critics may eventually break through the “good government” frame. As policy tradeoffs are introduced and discussed, support for the whole package increases. Simpson-Bowles needs to be discussed specifically and holistically.
Type
Master's project
Department
The Sanford School of Public Policy
Subject
Budget, Politics, Simpson-Bowles
Permalink
https://hdl.handle.net/10161/8481
Citation
Tessier, Emma (2014). The Perplexing Policy Status of the Simpson-Bowles Fiscal Package: A Case Study Analysis. Master's project, Duke University. Retrieved from https://hdl.handle.net/10161/8481.
Collections
More Info
Show full item record