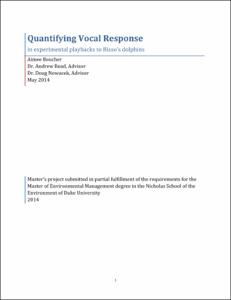 View / Download
3.8 Mb
Date
Author
Boucher, Aimee
Advisors
Read, Andrew J
Nowacek, Douglas
Repository Usage Stats
326
views
224
downloads
Abstract
In a world of constant technological development and expansion into the marine environment, the marine soundscape is constantly changing. With the addition of anthropogenic sources from naval sonar to seismic survey vessels over the past century, the deficiency of knowledge on the impact of such acoustic disturbance leaves little guidance for effective regulation of anthropogenic marine noise pollution. To help address this, the U.S. Department of Defense’s Strategic Environmental Research and Development Program (SERDP) has teamed with multiple academic and scientific institutions to research and catalog the baseline behavioral ecology across a range of odontocete species, which can then serve as a baseline for additional research. This report examines a portion of that project, conducted to assess the response of Risso’s dolphin, Grampus griseus, to natural stimuli. During an August 2013 playback study off Southern California, acoustic data were collected via digital acoustic recording tags (DTAGs) to identify the vocal response of three Risso’s dolphins, Grampus griseus. The playbacks consisted of calls from three cetacean species: Megaptera novaeangliae, Orcinus orca, and Grampus griseus. To determine whether the vocal rate measurements could be reliably quantified, a repeatability experiment was conducted. Two playback studies (O. orca and G. griseus) were conducted on one animal, while three playbacks (O. orca, G. griseus, and M. novaeangliae) were presented to two animals. Only one of the tagged animals demonstrated a noteworthy response to the O. orca exposure, with more than a 500% increase in vocalizations after the playback. Vocal rate did not vary considerably in the tag with O. orca and G. griseus playbacks and the other tag resulted in roughly zero vocalizations during pre- and post-playbacks. Based on the small sample size, it appears that G. griseus response varies in the presence of a predator – with one tag demonstrating a dramatic increase of vocal rate when exposed to O. orca calls. These results are a necessary early step in gathering baseline information on the behavioral ecology of cetaceans susceptible to anthropogenic acoustic impact. A continuation of this project and further research is necessary to fully understand how marine mammals perceive and are impacted by human expansion into the marine soundscape.
Type
Master's project
Department
Nicholas School of the Environment and Earth Sciences
Subject
baseline
behavioral
acoustic
cetacean
sonar
playback
Permalink
https://hdl.handle.net/10161/8494
Citation
Boucher, Aimee (2014). Quantifying vocal response in experimental playbacks to Risso's dolphins. Master's project, Duke University. Retrieved from https://hdl.handle.net/10161/8494.
Collections
More Info
Show full item record