Analysis of Work in Retirement 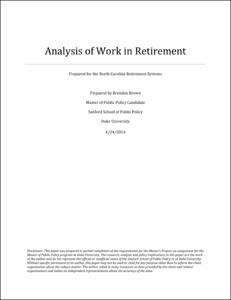 Files
Main document
1.1 Mb
Appendix One: Results tables
106.8 Kb
Appendix Three: R code
348.6 Kb
Appendix_Two_stats_and_concepts.pdf
217.5 Kb
Date
Author
Brown, Brendan
Advisor
Rosch, Joel B
Repository Usage Stats
299
views
1,355
downloads
Abstract
Retirement system staff are in the midst of contemplating changes to policies limiting work in retirement for members of the Local Governmental Employees’ Retirement System (LGERS) and the Teachers’ and State Employees’ Retirement System (TSERS). Until recently, the retirement system had no comprehensive data about how many of its retirees return to work, when, for how long, and how much they earn in doing so. The project analyzes a new dataset including that information for all LGERS and TSERS retirees who worked in retirement -- from Jan. 1, 2007 to Dec. 31, 2013 -- for employers in the same systems from which they retired, while continuing to receive their retirement benefits. I try to answer two questions using least-squares regression and survival analysis: 1. Which characteristics, if any, suggest retirees in the dataset were willing to work for less in retirement, holding constant pre-retirement compensation and other factors? 2. Which characteristics influenced how long those retirees worked?
Type
Master's project
Department
The Sanford School of Public Policy
Permalink
https://hdl.handle.net/10161/8499
Citation
Brown, Brendan (2014). Analysis of Work in Retirement. Master's project, Duke University. Retrieved from https://hdl.handle.net/10161/8499.
Collections
More Info
Show full item record