Heat Reductions and Carbon Emissions: A Policy Mechanism for Regulating Coal Plants under 111(d) of the Clean Air Act 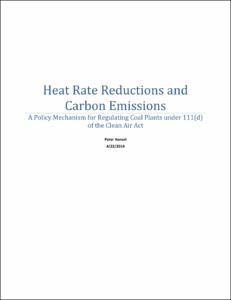 View / Download
1.1 Mb
Date
Author
Hansel, Peter
Advisor
Monast, Jonas
Repository Usage Stats
187
views
1,434
downloads
Abstract
The Clean Air Act requires the EPA to regulate carbon dioxide and greenhouse gases to protect public health and welfare. Currently the agency is in the process of developing standards for existing coal power plants under section 111(d) of the CAA and are expected to issue the proposed rule this summer. These regulations have the potential to drastically reduce emissions in the United States. Of the policy proposals and recommendations that have been submitted to the EPA, most advocate for including flexibility mechanisms, such as emissions trading, crediting and offsets, in the guidance policy. However, such broad mechanisms have limited precedence under 111(d) and their legality is untested. This paper explores a more conservative approach by regulating coal units within-the-fence-line. Specifically, the proposed policy would require uniform mandatory heat rate reductions for all coal units, regardless of initial heat rate. All coal units would be required to lower heat rates by 740-810 Btu/kWh, resulting in an 8% fleet-wide average. Inefficient units would be allowed to continue to operate alongside more efficient ones as long as each reduces their heat rate by the given amount. The policy was modeled and this analysis finds that despite costs associated with installing heat-rate reducing technology, costs to plant operators and consumers are reduced. This is mainly due to the decreases in fuel costs that accompany the efficiency improvements. As a result, it is more economical for many coal plants to operate. US generation from coal increases 4% relative to a reference and electricity prices per kWh decrease. Costs associated with the policy do force some coal units into retirement. An additional 4.3 GW of coal capacity and 50 coal units are retired compared to the 4.4 GW that are expected to retire absent any policy. However, the units that close operate at low or zero capacity and specific regions are not disproportionally affected over others. Carbon emissions are reduced by 68 megatons the first year that the policy goes into effect relative to the reference scenario and avoids 1,284 Mt of cumulative carbon emission over the lifetime of the analysis (2016-2030). However, overall, the policy does not force any changes in electrical generation. No new low-carbon resources are built as a result of the policy. Therefore, total emissions continue to rise through the end of the analysis as the economy grows. Despite starting below 2005 levels, emissions increase to 4.3% above 2005 levels by 2030. Overall, the policy represents a less ambitious course of action to reduce carbon emissions from coal power plants but still allows reductions to take place at low economic costs and would likely stand up to challenges in court. While it is unlikely that the EPA will chose such a limited approach to regulating coal plants under 111(d), the proposed policy could serve as a sound option if other alternatives fail.
Type
Master's project
Department
Nicholas School of the Environment and Earth Sciences
Subject
coal 111(d) EPA carbon emissions regulation
Permalink
https://hdl.handle.net/10161/8508
Citation
Hansel, Peter (2014). Heat Reductions and Carbon Emissions: A Policy Mechanism for Regulating Coal Plants under 111(d) of the Clean Air Act. Master's project, Duke University. Retrieved from https://hdl.handle.net/10161/8508.
Collections
More Info
Show full item record