Evaluating the Extent of Pressure and Level of Harassment Exerted on Bottlenose Dolphins (Tursiops truncatus) During "Swim-With" Tours in Panama City Beach, FL 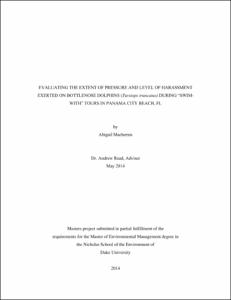 View / Download
312.1 Kb
Date
Author
Machernis, Abigail
Advisor
Read, Andrew
Repository Usage Stats
230
views
270
downloads
Abstract
Federal and state management agencies have attempted to address the harassment and illegal feeding of wild dolphins in the United States, but few studies have evaluated the efficacy of these interventions. In 1998, Samuels and Bejder conducted a study contracted by the Marine Mammal Commission to document the number of dolphins affected by illegal feeding and harassment in Panama City Beach, FL. Since the results of their study, more resources have been allocated towards increasing the presence of undercover officers on dolphin tour boats, fines have been issued for counts of illegal feeding, and there has been an increase in education and outreach efforts. The present study reevaluates the current level of harassment and illegal feeding towards dolphins in Panama City Beach, FL, which can be used as a comparison to the work of Samuels and Bejder and subsequent management actions. In the study, I conducted 10 hours of detailed observations over five days to quantify the number of vessels and swimmers surrounding dolphins during tours, assess the type and frequency of harassment behaviors in the presence and absence of Marine Patrol vessels, and discuss dolphin responses to harassment behavior. On average, I recorded 1.4 boats, 1.1 jet skis and 0.7 swimmers surrounding an individual dolphin. The most common harassment behaviors included chasing, luring and corralling dolphins. The frequency of harassment was significantly greater when the Marine Patrol was absent; I observed 75 harassment behaviors in their absence and only six in their presence. Lastly, most dolphin responses observed were expected from the conditioned status of that animal. These findings suggest that dolphins are rarely alleviated from anthropogenic pressure during tours and that harassment and illegal feeding is still prevalent, however, significantly lessened in the presence of Marine Patrol. These results and conclusions offer a benchmark to inform future management actions under the Marine Mammal Protection Act.
Type
Master's project
Department
Nicholas School of the Environment and Earth Sciences
Subject
Human-dolphin interaction, bottlenose dolphin, "swim-with" dolphins, feeding, tourism
Permalink
https://hdl.handle.net/10161/8510
Citation
Machernis, Abigail (2014). Evaluating the Extent of Pressure and Level of Harassment Exerted on Bottlenose Dolphins (Tursiops truncatus) During "Swim-With" Tours in Panama City Beach, FL. Master's project, Duke University. Retrieved from https://hdl.handle.net/10161/8510.
Collections
More Info
Show full item record