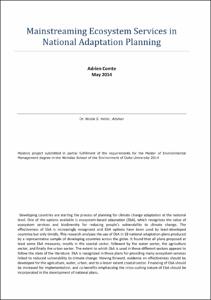 View / Download
1.1 Mb
Date
Author
Adrien Comte
Advisor
Nicole Heller, Bruno Locatelli
Repository Usage Stats
261
views
437
downloads
Abstract
Developing countries are starting the process of planning for climate change adaptation at the national level. One of the options available is ecosystem-based adaptation (EbA), which recognizes the value of ecosystem services and biodiversity for reducing people’s vulnerability to climate change. The effectiveness of EbA is increasingly recognized and EbA options have been used by least-developed countries but only timidly. This research analyses the use of EbA in 18 national adaptation plans produced by a representative sample of developing countries across the globe. It found that all plans proposed at least some EbA measures, mostly in the coastal sector, followed by the water sector, the agriculture sector, and finally the urban sector. The extent to which EbA is used in these different sectors appears to follow the state of the literature. EbA is recognized in these plans for providing many ecosystem services linked to reduced vulnerability to climate change. Moving forward, evidence on effectiveness should be developed for the agriculture, water, urban, and to a lesser extent coastal sector. Financing of EbA should be increased for implementation, and co-benefits emphasizing the cross-cutting nature of EbA should be incorporated in the development of national plans.
Type
Master's project
Department
Nicholas School of the Environment and Earth Sciences
Subject
climate change adaptation, ecosystem-based adaptation, developing countries, national planning
Permalink
https://hdl.handle.net/10161/8511
Citation
Adrien Comte (2014). Mainstreaming Ecosystem Services in National Adaptation Planning. Master's project, Duke University. Retrieved from https://hdl.handle.net/10161/8511.
Collections
More Info
Show full item record