To Frac or Not To Frac: Campaign Donations and Legislator Behavior 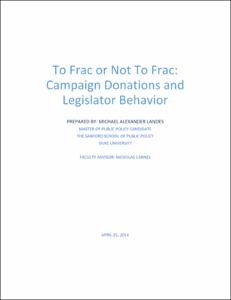 View / Download
297.0 Kb
Date
Author
Landes, Michael
Advisor
Carnes, Nicholas William
Repository Usage Stats
253
views
361
downloads
Abstract
Few academics have closely inspected the influence of money in state-level elections, leaving a gap in the literature with respect to how special interests garner votes in state legislatures. This study examines the relationship between campaign donations and legislator behavior using OLS regression analysis on the voting record of 176 state senators and representatives in the North Carolina General Assembly on three bills related to hydraulic fracturing. Regression results show that the percentage anti-fracking donations make up of a legislator’s total donations is positively correlated with a likelihood to vote against a pro-fracking bill. Results are less conclusive for the relationship between pro-fracking interests and likelihood to vote for a given bill, though there is a strong positive correlation between a legislator’s affiliation to the Republican Party and her likelihood to vote for a pro-fracking bill. These findings do not invalidate the hypothesis that legislators who receive money from pro-fracking interests are more likely to vote in favor of a pro-fracking bill. More data and further study of this subject are necessary to appropriately assess the relationship between campaign donations and legislator behavior.
Type
Master's project
Department
The Sanford School of Public Policy
Permalink
https://hdl.handle.net/10161/8535
Citation
Landes, Michael (2014). To Frac or Not To Frac: Campaign Donations and Legislator Behavior. Master's project, Duke University. Retrieved from https://hdl.handle.net/10161/8535.
Collections
More Info
Show full item record