Effective Drought Management For Sustained Livelihoods in the Middle East 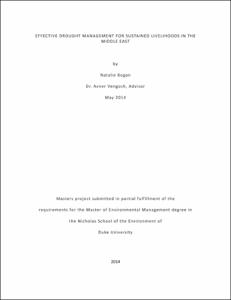 View / Download
1.6 Mb
Date
Author
Bogan, Natalie
Advisor
Vengosh, Avner
Repository Usage Stats
275
views
1,004
downloads
Abstract
Drought has become a more frequent and a major threat to human security in most of the Arab countries located in arid and semi-arid areas of North Africa and Western Asia. The responses to severe drought in the region’s countries are mainly ex-post (reactive) and tend to emphasize emergency relief, take effect after or during drought events and do not incorporate methods that support water conflict prevention. The United Nations recognizes the need to address water scarcity and drought in the Middle East so they began a new initiative to strengthen national capacities to manage drought and water scarcity this region. This project is an extension of the United Nations initiative and focuses on pre-impact and preparedness drought management planning in the Middle East. 10 pilot countries from the Middle East are involved in the project to provide critical information about the current drought management practices in their individual countries. The project is broken up into two separate sections: Section 1 is the analysis, mapping and identification of critical gaps in pre-impact and preparedness drought management in the Middle East, and Section 2 is a case study of drought management in Israel. For Section 1, responses from the pilot country representatives and a thorough literature review of successful drought management strategies in other arid regions of the world were used to determine opportunities for capacity building and pre-impact preparedness drought management strategies that could be used in the Middle East. Based on the literature review and interview responses from the pilot countries, results showed that Middle Eastern countries would benefit from adopting early warning systems, microfinance and index-based insurance, and longer-term drought management strategies that emphasized preparedness. For Section 2 of the project, the Israel case study, lessons learned from Section 1 and CIHEAM guidelines were applied to Israel to develop effective long-term, proactive drought management strategies for the country. CIHEAM is an intergovernmental organization trusted by the United Nations and is a leader in the fields of drought, agriculture and rural development. Some of the strategies most suitable for Israel include wastewater treatment and reuse, crop diversification and seawater and brackish water desalinization.
Type
Master's project
Department
Nicholas School of the Environment and Earth Sciences
Subject
Drought Management, Vulnerability, Drought Risk, Water Scarcity, Mitigation
Permalink
https://hdl.handle.net/10161/8556
Citation
Bogan, Natalie (2014). Effective Drought Management For Sustained Livelihoods in the Middle East. Master's project, Duke University. Retrieved from https://hdl.handle.net/10161/8556.
Collections
More Info
Show full item record