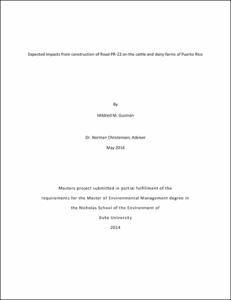 View / Download
1.1 Mb
Date
Authors
Guzmán, Mildred M.
Guzman, Mildred
Advisor
Christensen, Dr. Norman
Repository Usage Stats
283
views
706
downloads
Abstract
The dairy industry is the most important economic sector of Puerto Rico’s Agriculture. Statistics indicate that during the 2010-2011 fiscal year it had a gross income of $235.1 MM, corresponding to a total of 29.8% of the total agriculture market. It employees some 25,000 people and supports other businesses such as cheese, hay sale and meat production. The industry is upheld by the dairy cattle ranchers, many of which are family-owned businesses. A threat to the industry was declared by the Departamento de Transportación y Obras Públicas (DTOP) when in 2010 it re-issued its intent to construct a road through areas on the northwest of the island. These areas are known for being the island’s top milk-producers. The objective of this Masters Project was to identify the expected impacts the road construction can have on the dairy cattle industry. This objective is pursued by understanding the current state of the industry, review DTOP’s stated need for construction, evaluate direct and indirect impacts to the industry, and review interviews to stakeholders provided by “Transecto Socio-Ecologico del Karso Norteño”. The result of the research leads to an industry whose production volumes, pasture areas, and amount of farms are already in decline. Stakeholders interviewed by Transecto foresee an industry weakened by parcel segregation that would make them impracticable for cattle grazing. As a result many milking facilities and ranches may have to close. For an industry in decline and with many operational complications, this project will likely have a big impact and may push it to the verge of collapse.
Type
Master's project
Department
Nicholas School of the Environment and Earth Sciences
Subject
dairy cattle, milk production, PR-22 extension, agriculture, Puerto Rico
Permalink
https://hdl.handle.net/10161/8565
Citation
Guzmán, Mildred M.; & Guzman, Mildred (2014). Expected impacts from construction of Road PR-22 on the cattle and dairy farms of Puerto Rico. Master's project, Duke University. Retrieved from https://hdl.handle.net/10161/8565.
Collections
More Info
Show full item record