Differences in the Media’s Framing of Fracking/Shale Gas in New York, Pennsylvania, Germany, and the United Kingdom 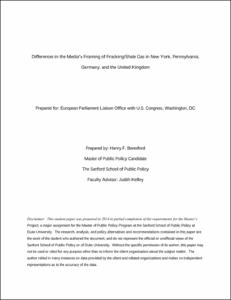 View / Download
797.6 Kb
Date
Author
Beresford, Henry
Advisor
Kelley, Judith
Repository Usage Stats
1,834
views
2,312
downloads
Abstract
Over the past decade, commercial mining firms in the United States have increasingly used horizontal drilling and hydraulic fracturing (fracking) to extract natural gas from shale rock formations (shale gas). The production of shale gas in the United States is booming: according to data from the U.S. Energy Information Administration (EIA), the percentage of U.S. domestic natural gas withdrawals from shale gas increased from 8.1% to 34.9% between 2007 and 2012, and U.S. wellhead natural gas prices dropped 57%. In contrast, Europe has not yet begun to produce shale gas on a commercial scale, even though EU natural gas prices are multiple times’ more expensive than U.S. natural gas prices. Others have proposed various historic, economic, political, and geologic reasons for this disparity, but comparatively little attention has been paid to the hypothesis that differences in news coverage may have contributed to disparity, or even towards describing differences in news coverage. The question remains: have European news media outlets framed shale gas any differently than American news media outlets? This paper presents the results of an original, preliminary inquiry into whether there exist differences in media framing of the shale gas/fracking in the U.S. versus the EU. A content analysis was performed on a representative sample of 712 fracking-related or shale gas-related texts from eight newspapers in New York, Pennsylvania, Germany, and the United Kingdom. All texts were published between January 1, 2007 and December 31, 2013. Ultimately, this study found significant differences in framing between the newspapers when analyzed individually (p<0.01) and when grouped by state (p<0.1). However, no significant differences in media frames were found between the shale-gas friendly jurisdictions (Pennsylvania & the United Kingdom) compared to shale-gas hostile jurisdictions (New York & Germany). Despite greater shale gas production in the U.S., the four U.S. papers on the whole were found to have presented a more negative frame towards shale gas than the four European newspapers (p<0.1). These results provide evidence that media coverage of shale gas varies strongly by state and local jurisdictions, suggest that U.S. and EU media representations of shale gas are more similar than a casual observer might guess, and indicate that grand generalizations about media representations of shale gas in the U.S. and the EU are to be avoided.
Type
Master's project
Department
The Sanford School of Public Policy
Subject
shale gas
fracking
hydraulic fracturing
political communication
european union
media framing
Permalink
https://hdl.handle.net/10161/8575
Citation
Beresford, Henry (2014). Differences in the Media’s Framing of Fracking/Shale Gas in New York, Pennsylvania, Germany, and the United Kingdom. Master's project, Duke University. Retrieved from https://hdl.handle.net/10161/8575.
Collections
More Info
Show full item record