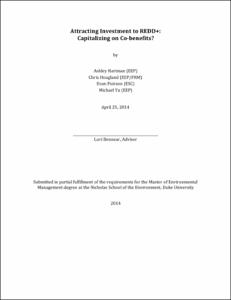 View / Download
1.1 Mb
Date
Authors
Poirson, Evan
Hartman, Ashley
Hoagland, Chris
Yu, Michael
Advisor
Bennear, Lori Snyder
Repository Usage Stats
448
views
550
downloads
Abstract
At its inception in 2007, the United Nations-sponsored Reducing Emissions from Deforestation and Forest Degradation (REDD+) mechanism had one primary goal: to mitigate carbon dioxide emissions from the global forest sector, which currently account for approximately 10% of global carbon emissions. REDD+ has undergone various modifications to its scope and approach in the succeeding nine years, but little has yet come from subsequent UN climate negotiations in the way of creating an obligatory financing scheme that would require participation from actors in developed countries. Today, dozens of preliminary REDD+ projects are operational across the world, but these projects receive strictly voluntary funding from a suite of public and private actors, including national governments and companies engaged in social responsibility practices. Despite some successes in this voluntary realm and promises of REDD+ advancement at recent negotiations, it has become clear that without assured funding – and pending an international financing mechanism for REDD+ – projects face an increasingly difficult environment for attaining capital resources. Scaling up the mechanism will be virtually impossible without addressing the imbalance between supply and demand for REDD+ credits in the voluntary stage. Code REDD, a San Francisco-based non-governmental organization whose mission is to support and scale the REDD+ mechanism, is attempting to discover whether untapped opportunities exist for sustaining REDD+ before the commencement of an international financing scheme, specifically by capitalizing on the co-benefits of REDD+ projects: the social and environmental outcomes that inherently accompany responsibly designed carbon offset projects. These co-benefits can include biodiversity benefits, freshwater provision, community economic development, and women’s empowerment. This question of the potential for co-benefit quantification and sale as a means to sustain REDD+ in the voluntary phase was the foundation of the research we undertook here. We aimed to determine how REDD+ stakeholders envisioned the role of co-benefits within the financing of REDD+, and if further efforts to quantify and sell them could bear meaningful results for the future of the mechanism. Splitting the REDD+ community into two distinct categories – practitioners (those who design, implement, and monitor REDD+ projects) and investors (both those who purchase REDD+ credits and those who invest in REDD+ projects) – we held more than twenty interviews to determine the answer to the above question. We found that, though co-benefits were considered an important – even indispensable – part of REDD+ success, few practitioners or investors were interested in their further quantification or expected that voluntary REDD+ could be sustained based on such action. That said, many current and potential investors offered insight into how the business case for REDD+ could be better articulated in order to attract more investment. Also, in speaking with practitioners, we identified ways that the mechanism could be better integrated with other contemporary environmental efforts, including biodiversity offsetting and water funds, offering what we believe could represent partial solutions to the REDD+ demand shortfall.
Type
Master's project
Department
Nicholas School of the Environment and Earth Sciences
Subject
REDD+
Climate Change
Forests
Carbon Offsets
UNFCCC
Permalink
https://hdl.handle.net/10161/8588
Citation
Poirson, Evan; Hartman, Ashley; Hoagland, Chris; & Yu, Michael (2014). Attracting Investment to REDD+: Capitalizing on Co-Benefits?. Master's project, Duke University. Retrieved from https://hdl.handle.net/10161/8588.
Collections
More Info
Show full item record