Spatial Influences on Rates of Denitrification in Floridan Karst Aquifers 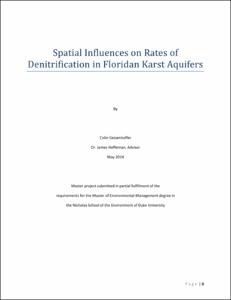 View / Download
1.6 Mb
Date
Author
Geisenhoffer, Colin
Advisor
Heffernan, James
Repository Usage Stats
242
views
264
downloads
Abstract
Nitrogen is a major contaminant of waterways throughout the world. This nitrogen is derived from a variety of sources including fertilizers, municipal wastewater, and atmospheric deposition. There has been a historical focus on nitrogen loading in surface waters, but in recent times this focus has shifted to denitrification. Denitrification is a major processes in which nitrogen is removed from waterways especially aquifers, which are often low in dissolved oxygen a critical factor for denitrification. This study focuses on the spatial relationships that influence this process using dissolved oxygen, nitrogen, and δ15N-NO3- data collected from a previous study in the karst Floridan Aquifer System by Heffernan et al. (2012). This data is compared to and various spatial datasets in order to understand their influence on these parameters. Many previous research studies have already shown how land covers exports varying amounts of nitrogen. Changes in nitrogen export between various landuses will change the amount of nitrogen entering a waterway. This study identified a relationship between landuse and different rates of dissolved oxygen, nitrogen loading, and denitrification. This paper also identified a strong relationship between wastewater treatment plant discharge that is land applied to changes in nitrogen loading and denitrification. To add further credence to the relationships between landuse and nitrogen a comparison of the isotope data collected in the Heffernan et al. (2012) was conducted. This comparison identified particular that various landuses show trends regarding their isotopic composition.
Type
Master's project
Department
Nicholas School of the Environment and Earth Sciences
Subject
aquifer, karst, denitrification, land cover, Florida, wastewater
Permalink
https://hdl.handle.net/10161/8589
Citation
Geisenhoffer, Colin (2014). Spatial Influences on Rates of Denitrification in Floridan Karst Aquifers. Master's project, Duke University. Retrieved from https://hdl.handle.net/10161/8589.
Collections
More Info
Show full item record