Pro-Poor Housing Rights for Slum Dwellers: The Case Against Evictions in Bangalore 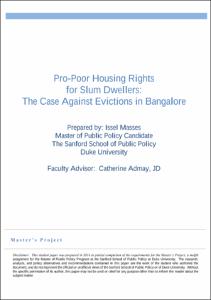 View / Download
1.6 Mb
Date
Author
Masses, Issel
Advisor
Admay, Catherine A.
Repository Usage Stats
449
views
3,690
downloads
Abstract
According to the Housing and Land Rights Network, from 2002-2012, around 2,676,652 people were victims of violations on housing and land rights in India. Slum evictions demolish a dweller’s shelter, and destroy the few belongings that dwellers have been able to acquire. They force slum dwellers to settle in other areas of the city, where housing conditions are worse and prospects for better jobs diminished. Thus, consequences of evictions can severely affect the livelihood of already impoverished and vulnerable people. Not surprisingly, the principal concern of slum dwellers who lack formal housing rights, is the threat of eviction. This Master’s Project aims to contribute to the body of policy-oriented research that focuses on housing rights and the protection from eviction of slum dwellers in Bangalore. The study evaluates the political economy context and identifies shortcomings of slum policy and ‘pro-poor’ efforts in relation to the protection of slum dwellers from eviction, focusing on the ten-year period of 2002-2012. The analysis reveals a significant gap between housing policy and housing needs, as those who need security of tenure the most, are generally unable to afford the costs of affordable housing alternatives offered by the government. This vulnerable segment of the population is also highly susceptible to evictions, which further threatens the stability of their livelihood. Perversely, even policies crafted at the central and state levels to address the vulnerabilities of the poorest city dwellers are not being implemented in a comprehensive, transparent and efficient manner by the respective public institutions. Additionally, standards and regulations tend to facilitate eviction processes and provide little protection from eviction or housing alternatives for unlawful dwellers. The gap between policy and the needs of the poor is further aggravated by the dwellers’ lack of information on their rights and the limited influence that vulnerable slum dwellers have on shaping reform. NGOs and other civil society actors have been working to advocate on behalf of the poor and advance their right to housing. Nevertheless, collective action problems and limited resources keep them from increasing the impact of their efforts. The research results of this study have led to the following recommendations: 1. NGOs should build the capacity of slum leaders and any emergent CBOs to pursue housing rights and protect themselves from eviction. CBOs and slum leaders should be trained on notification processes and other related tasks that can help advance the community’s agenda. 2. NGOs should reprioritize their work, increasing investment of resources in a few specific key areas of work to maximize impact. By implementing recommendation 1, CBOs will take some responsibility away from NGOs, allowing NGOs to focus more on implementing specific and complex strategies. Some of these include: i) raising awareness nationally and globally on the vulnerability of the poorest slum dwellers, ii) seeking the courts help for the advancement of housing rights as well as safety nets around eviction, and iii) advocating at the central and state levels for the further development and actual implementation of ‘pro-poor’ policies, including schemes on night shelters, temporary housing, and property rights.
Type
Master's project
Department
The Sanford School of Public Policy
Subject
housing rights, pro-poor, political economy, development, governance
Permalink
https://hdl.handle.net/10161/8594
Citation
Masses, Issel (2014). Pro-Poor Housing Rights for Slum Dwellers: The Case Against Evictions in Bangalore. Master's project, Duke University. Retrieved from https://hdl.handle.net/10161/8594.
Collections
More Info
Show full item record