Access and Absence: A Quasi-Experimental Study of the Effect of North Carolina School Health Centers on Student Absenteeism 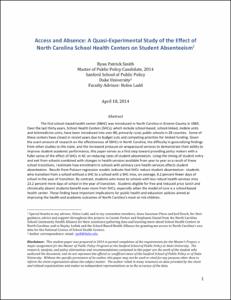 View / Download
3.6 Mb
Date
Author
Smith, Ryan
Advisor
Ladd, Helen F
Repository Usage Stats
1,359
views
565
downloads
Abstract
The first school-based health center (SBHC) was introduced in North Carolina in Greene County in 1983. Over the last thirty years, School Health Centers (SHCs), which include school-based, school-linked, mobile units and telemedicine units, have been introduced in over 80, primarily rural, public schools in 28 counties. These centers provide a wide range of health care services, with many providing comprehensive primary and mental health care services, to populations with historically limited access to health care. Some of these centers have closed in recent years due to budget cuts and competing priorities for limited funding. Given the scant amount of research on the effectiveness of SHCs in North Carolina, the difficulty in generalizing findings from other studies to this state, and the increased pressure on wraparound services to demonstrate their ability to improve student academic performance, this paper serves as a first step toward providing policy makers with a greater understanding of the effect SHCs in North Carolina have on reducing rates of student absenteeism. It is widely accepted that student absenteeism inhibits student learning and that children in poor health are more likely to miss school. Research shows that as the number of school days a student misses increases, academic achievement tends to decline. Studies on the relationship between SHCs and student absenteeism have been both limited in number and varied in their findings. Non-random assignment of SHCs in schools with high concentrations of students from low-income households, who are at increased risk for poor academic outcomes, makes assessing the effect of school health services on academic indicators difficult to accurately measure due to selection bias. To address evaluation challenges created by selection bias, as well as by a lack of reliable attendance data pre-2006 (long after many SHCs were introduced in North Carolina), I take advantage of student transitions between schools to examine the effect of entering or leaving a school with more robust health services. I follow four cohorts of students from 2006 to 2012 as they transition between schools in counties where SHCs are located. Using the timing of student entry and exit from schools combined with changes in health services available from year to year as a result of these school transitions, I estimate how enrollment in schools with primary care health services affects student absenteeism. Results from Poisson regression models indicate that SHCs are associated with moderate reductions in rates of student absenteeism. Students who transition from a school without a SHC to a school with a SHC miss, on average, 8.2 percent fewer days of school in the year of transition. By contrast, students who move to schools with less robust health services miss 13.2 percent more days of school in the year of transition. Students eligible for free and reduced price lunch and students with a history of chronic absenteeism benefit even more than the general student population from enrollment in schools with SHCs, especially if the model of care is a school-based health center. When these subgroups traditionally considered at higher risk for poor academic outcomes transition from schools without SHBCs to schools with SBHCs they miss, on average, 13.4 and 18.1 percent fewer days, respectively. These findings have important implications for public health and education policies aimed at improving the health and academic outcomes of North Carolina’s most at-risk children.
Type
Master's project
Department
The Sanford School of Public Policy
Subject
School-based Health Centers
North Carolina Education
Public Health
Student Absenteeism
School Health
Permalink
https://hdl.handle.net/10161/8595
Citation
Smith, Ryan (2014). Access and Absence: A Quasi-Experimental Study of the Effect of North Carolina School Health Centers on Student Absenteeism. Master's project, Duke University. Retrieved from https://hdl.handle.net/10161/8595.
Collections
More Info
Show full item record