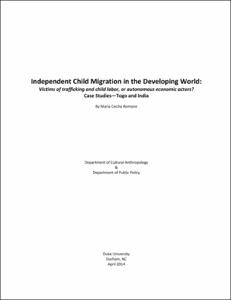 View / Download
2.8 Mb
Date
Author
Romano, Maria Cecilia
Repository Usage Stats
488
views
942
downloads
Abstract
Child trafficking and child labor are two terms that tend to elicit vivid images of suffering and there are countless IGOs, NGOs, advocacy organizations, government programs, and pieces of legislation worldwide that aim to combat both. Using two small rural communities in India and in Togo as primary case studies, I argue that the definitions of these two terms, upon which international and national laws are predicated, are far too vague. They ignore the reality of independent child migrants by failing to account for children’s agency, however structurally constrained that agency might be. While child trafficking and child labor are frequently discussed, independent child migrants are not as well understood. This ethnographic and policy study examines the following question--what are the ways in which the dominant international discourse on child trafficking and child labor is incongruous with the real economic predicaments of independent child migrants? How might we rethink these normative understandings of childhood and labor in order to allow for the possibility of children’s agency and create policy that accordingly supports youth migratory endeavors, while still mitigating the negative aspects of the migration of independent child migrants? Though potentially controversial, I argue that the limited resources of the governments in countries where child migration is an issue would be more effective if allocated toward making this migration safer and its economic returns more reliable, rather than toward simple interdiction--a shift toward support in the place of mere protection. This strategy requires a new, culturally-appropriate conceptualization of “childhood” and of what economic activities are acceptable for children partake in. Both “developed” and “developing” countries can work toward this goal by conducting more research and supporting grassroots intervention initiatives that rely on local knowledge of the history, culture, and unique situation of each population in the place of historically problematic top-down “solutions.”
Type
Honors thesis
Department
Cultural Anthropology
Subject
child labor, child trafficking, independent child migration, children's agency, pro-child research
Permalink
https://hdl.handle.net/10161/8601
Citation
Romano, Maria Cecilia (2014). Independent Child Migration in the Developing World: Victims of trafficking and child labor, or autonomous economic actors?. Honors thesis, Duke University. Retrieved from https://hdl.handle.net/10161/8601.
Collections
More Info
Show full item record