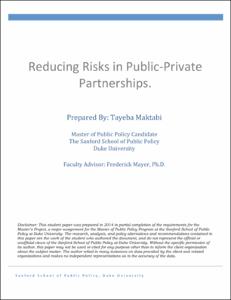 View / Download
1.0 Mb
Date
Author
Maktabi, Tayeba
Advisor
Mayer, Frederick
Repository Usage Stats
941
views
2,955
downloads
Abstract
EXECUTIVE SUMMARY PUBLIC PRIVATE PARTNERSHIP Public-private partnerships (PPPs) can be a powerful tool for finding solutions to complex social challenges. PPP can essentially be defined as the partnership between public institutions and private sector corporations. Typically, these partnerships are seen as a way to share risks and collaborate expertise, best practices, and resources to deliver services in a more cost-effective and efficient manner by getting more “value for money”. PPPs can also provide new resources, build capacity, and improve existing systems to help governments meet development goals. However, along with the benefits that PPPs can bring are inherent risks that can lead to derailment of program goals and even eroding larger developmental achievements of countries. While research on PPPs is still scarce, a few studies by World Bank, OECD, and others have illuminated some important aspects of PPPs to help future partnerships be more effective at reducing risks. Risks of PPP Over the years, PPPs have begun to expand its reach across various domains and regions. Today, PPPs can vary in structure, form, scope, and location. However, despite these differences, the risks faced by PPPs share some common themes. Risks such as poor governance, misaligned priorities, underrepresentation of public sector in decision-making, poor communication streams, lack of coordination and cooperation between partners, insufficient and unsustainable financing, and lack of support from leaders can lead to derailment of PPPs. Reducing Risks of PPP While these risks exist in many partnerships, governments and PPP leaders can institute various measures designed to minimize them as much as possible. Table 1 (page 12) highlights some of the key elements for reducing risks in PPPs. Based on literature research of best practices and case studies, Table 1 provides guidance for minimizing risks from the initial stages of PPPs to the end. For example, when partnerships are established it is important to make sure partners share similar goals and that they bring value to the project. Additionally, during the implementation phase, PPPs can reduce risks by instituting monitoring and evaluation mechanisms. Finally, risks can be reduced at the end of PPPs by ensuring sustainability through training, knowledge transfer, and creating a clear exit strategy for partners. CASE STUDIES: Four case studies on PPPs from Bangladesh, Nepal, Tanzania, and Uganda were analyzed based on elements from Table 1 to determine whether these PPPs were successful at reducing risks and to identify which elements were crucial to risk reduction. Each case study was analyzed based on the roles of stakeholders, the funding models, the risks faced by the partnership, and what factors in the partnership reduced these risks. LESSONS LEARNED Analyses from the four case studies have highlighted some important lessons for reducing risks in future PPPs. It appears that while all the elements in Table 1 are important for reducing risks in PPPs, there were a number that were largely salient in the case studies analyzed here. Particularly noteworthy was the role and involvement of the government in PPPs, the importance of robust communication streams, the necessity of creating a sense of ownership and trust between partners in the project, and ensuring sustainable funding systems to reduce risks and guarantee success of PPP programs. For example, in some of the cases, having a strong government presence in the program reassured other partners that they could rely on the government to provide resources and funding for program implementation. Sufficient policies, regulations, frameworks, fiscal and non-fiscal support, communication, and government engagement were necessary to hold partners accountable and minimize risks. Furthermore, in all of the cases, robust communication channels were vital for risk reduction. In both the Bangladesh and Nepal cases there were strong mechanisms for open communication channels, which helped reduce risks by keeping partners engaged and invested in the PPP project. In addition, insufficient funding also created a great risk for PPP programs. For example, in Uganda the lack of sufficient funding from the government limited the scope and capacity of the program. Therefore, governments and donors need to ensure sufficient funding and resources are available to implement the program successfully. CONCLUSION PPPs vary greatly across scope, structure, implementation, and goals, which makes it rather difficult to predict future risks or work to eliminate risks in PPPs altogether. However, research has shown that PPP leaders can take a number of preventive steps to minimizing risks before they create challenges in the future. Some of these steps have been highlighted in Table 1 of this report. Furthermore, the examination of case studies using Table 1 as a guide surfaced four common elements that were key to reducing risks in PPPs: the role and involvement of the government, robust communication streams, building a sense of ownership and trust between partners in the project, and sustainable funding systems appeared critical to minimizing risks in each case. Therefore, partnerships will have a greater chance of sustainability and program success if they focus on improving these areas of the PPP.
Type
Master's project
Department
The Sanford School of Public Policy
Subject
Public-Private Partnerships
Risk Reduction
Global Health
Public Private Partnerships in Development
PPP
Permalink
https://hdl.handle.net/10161/8610
Citation
Maktabi, Tayeba (2014). Reducing Risks in Public Private Partnerships. Master's project, Duke University. Retrieved from https://hdl.handle.net/10161/8610.
Collections
More Info
Show full item record