Undeterrable Ideologue or Deterrable Pragmatist: An Assessment of the Rationality of the Islamic Republic of Iran’s Conflict Initiating Behavior 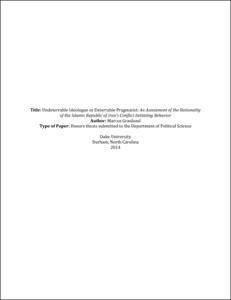 View / Download
275.3 Kb
Date
Author
Granlund, Marcus
Repository Usage Stats
350
views
257
downloads
Abstract
I seek to analyze Iran’s conflict initiating behavior by means of assessing the state’s national capabilities relative to its primary targets of aggression in order to discern whether the Islamic Republic of Iran has experienced a tendency to initiate conflict against relatively more powerful states. Rooted in the fundamental assumption that a rational state does not initiate conflict against other states that are significantly more powerful than it is, the analysis is conducted in the hope of shedding light on whether Iran’s conflict-initiating behavior has been rational post-1979 in order to determine the state’s deterrability. The study is conducted by first employing a cross-temporal within-case study that looks at fluctuations in the dyadic balance of power in militarized interstate disputes (MIDs) initiated by Iran across four distinct periods of time: 1957-1967, 1968-1978, 1979-1989 and 1990-2000. Secondly, Iran’s fluctuations are compared to those experienced by two other revolutionary authoritarian regimes, the Soviet Union and China, during the time period that extends from two decades before their respective revolutions to two decades after. Lastly, I create a control variable comprising 20 randomized MIDs where the initiator’s Composite Index of National Capability (CINC) score falls within the range of Iran’s over the course of its history during the period 1957-2000. The study finds that Iran’s conflict initiating behavior became significantly less rational in the decade immediately succeeding the revolution, but that it thereafter became increasingly rational and less hostile. Importantly, Iranian conflict initiations have, on average, occurred within the confines of rational behavior across each of the four time periods considered, including post-1979. The Islamic Republic thus fits the mold of a deterrable pragmatist rather than an undeterrable ideologue.
Type
Honors thesis
Department
Political Science
Subject
Iran
Rationality
Deterrence theory
Militarized interstate dispute
Conflict initiation
Nuclear weapons
Permalink
https://hdl.handle.net/10161/8611
Citation
Granlund, Marcus (2014). Undeterrable Ideologue or Deterrable Pragmatist: An Assessment of the Rationality of the Islamic Republic of Iran’s Conflict Initiating Behavior. Honors thesis, Duke University. Retrieved from https://hdl.handle.net/10161/8611.
Collections
More Info
Show full item record