A State-Based Marketplace in North Carolina 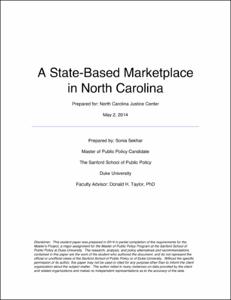 View / Download
381.5 Kb
Date
Author
Sekhar, Sonia
Advisor
Taylor, Donald Hugh
Repository Usage Stats
378
views
732
downloads
Abstract
On March 23, 2010, the Affordable Care Act (ACA), the most significant U.S. health policy legislation since Medicare and Medicaid, became law. The law’s main objective is to reduce the number of uninsured U.S. residents. Among its most important provisions, is the creation of new health insurance marketplaces, where consumers can choose from a range of health plan options and potentially receive tax credits to pay for coverage. Nationwide, new marketplaces are estimated to reduce the number of uninsured U.S. residents by more than 20 million over ten years. States have the option of implementing their own marketplace—a state-based marketplace (SBM)—or to defer responsibility to the federal government. North Carolina chose to defer to a Federally Facilitated Marketplace (FFM). FFM states have the option to engage in plan management, which includes premium rating standards, transparency, accreditation, geographic service areas, and premium rating areas. States who currently do not choose to or do not have the capacity to implement their own marketplace have the option to transition to a State-Federal Partnership or SBM, or conduct plan management, in the future. Given its high rate of uninsurance, increasing health insurance costs, and an apparent demand for health insurance, North Carolina policymakers should consider whether a FFM or SBM would better serve its residents. However, the state also needs to consider what additional responsibilities it would need to take on, and whether the benefits of a SBM exceed its costs from the perspective of North Carolina residents. In particular, North Carolina needs to consider what additional investments it needs to make in outreach and enrollment; how it will setup a viable IT system; impact of regulatory flexibility; and if it can garner the necessary political support to make marketplace implementation successful. The early experiences of SBM states are also instructive in the challenges and opportunities that come with implementing a SBM. This paper highlights how SBM implementation played out in two states that have gotten a lot of attention, Massachusetts and Kentucky, and key takeaways that will help North Carolina decide its future role in marketplace implementation. With more than 8 million enrollees in marketplaces across the country, including nearly 360,000 in North Carolina, the state has an important decision to make. Should North Carolina take an active role in shaping its health insurance market, or maintain the status quo? There are arguments to be made on both sides of this issue, but under the assumption that ACA repeal is unlikely, it is important for policymakers in North Carolina to ask themselves whether they want the federal government to continue to manage their health insurance market for the foreseeable future. Recommendations I recommend North Carolina take on a more active role in the implementation of the ACA by taking the following steps: 1. Issue an executive order establishing a commission to evaluate the costs and benefits of establishing a SBM and issue a recommendation on whether or not North Carolina should implement an SBM. 2. Pass legislation enabling the North Carolina Department of Insurance to conduct plan management for health plans available on North Carolina’s marketplace. The above recommendations represent a balanced approach the state could take that acknowledge the political contentiousness around the ACA, and the fact that nearly 360,000 North Carolinians have already enrolled in coverage. Indeed, now that approximately 8 million individuals have enrolled in coverage through marketplaces, it would be very difficult for Congress to repeal the ACA. In addition, depending on the draft language of the executive order, the commission North Carolina establishes could still have access to federal funding in 2014 to complete its work. Politics may continue to drive the direction of ACA implementation in North Carolina, however, by taking a more active role in plan management and establishing a commission to evaluate the costs and benefits of establishing a SBM, North Carolina would avoid the potential political fallout that may result if it immediately implemented a SBM. In addition, it would not be increasing costs to the state, and it would be taking steps to improve the quality of health plans available to residents.
Type
Master's project
Department
The Sanford School of Public Policy
Subject
health reform, affordable care act, health insurance exchanges, health insurance marketplaces, obamacare
Permalink
https://hdl.handle.net/10161/8614
Citation
Sekhar, Sonia (2014). A State-Based Marketplace in North Carolina. Master's project, Duke University. Retrieved from https://hdl.handle.net/10161/8614.
Collections
More Info
Show full item record