Looking at K-Pop as an I-fan: a Reflection of Mesmerizing yet Imperfect Identities 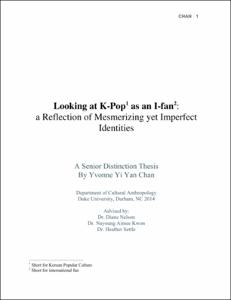 View / Download
19.0 Mb
Date
Author
Chan, Yvonne Yi Yan
Repository Usage Stats
1,269
views
1,197
downloads
Abstract
In the past decade, Korea has become the new powerhouse of popular culture within Asia, and Korean Popular Culture, short for K-Pop, is gaining popularity worldwide. Thanks to the Internet and digital media, people across the globe are able to participate in this growing phenomenon. Based on interviews of international fans (I-fans) and ethnographic fieldwork in South Korea, this thesis explores why international K-pop fans want to consume K-pop and the difficulties they face as consumers who do not belong to the culture on the first place. By examining music videos, reality shows, commercials and celebrity endorsements, I illustrate that K-pop is commodifying Korean culture into something that captures fans worldwide. In addition, I draw upon Korean history and theories of fetishization, mirror phase and male gaze to connect K-Pop with Korea’s fixation over perfection and chastity. Finally, I argue that K-Pop’s appeal lies upon its ability to reflect the vulnerabilities and struggles the younger generations face in society today.
Type
Honors thesis
Department
Cultural Anthropology
Subject
Korean Popular Culture, International Fan, K-Pop
Permalink
https://hdl.handle.net/10161/8615
Citation
Chan, Yvonne Yi Yan (2014). Looking at K-Pop as an I-fan: a Reflection of Mesmerizing yet Imperfect Identities. Honors thesis, Duke University. Retrieved from https://hdl.handle.net/10161/8615.
Collections
More Info
Show full item record