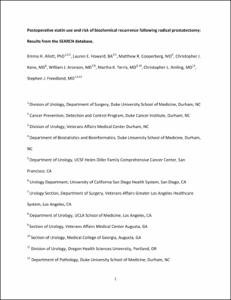 Biostatistician III
Lauren collaborates with different investigators in the Duke Cancer Institute on retrospective studies and clinical trials. She has experience with data management, data analysis, and preparation and editing of manuscripts. Some of her past projects have involved time-varying covariates, competing risks, and repeated measures. She is interested in methods for handling bias and confounding in observational research.